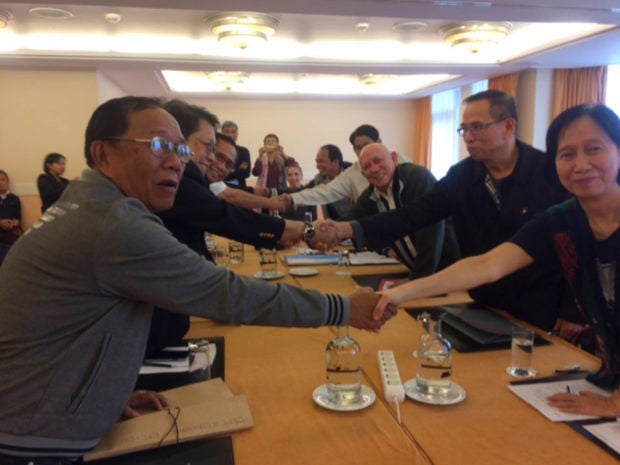 RESURRECTED AGREEMENT In this April 5, 2017 file photo, government and National Democratic Front of the Philippines negotiators shake hands on a joint ceasefire agreement they have recently revived to restart the stalled peace talks. CONTRIBUTED PHOTO

“Every administration, including that of your father, intensified its respective counter-insurgency program aimed at defeating the communist rebellion. Despite the massive campaigns implemented by these administrations to end this armed conflict, it has continued to rage, particularly in the countryside, causing internal displacement in the most vulnerable communities,” PEPP said in a statement on Thursday.

“This long-running conflict only mirrors how deeply embedded its roots are in social injustice. Can there be peace without justice and meaningful change in the lives of the majority of our people who continue to wallow in poverty and misery?” the group added.

The group likewise pushed Marcos to recognize that the all-out-war policy of his predecessor, Rodrigo Duterte, “failed to resolve the decades-old armed conflict despite the investment of huge resources and personnel better spent on poverty alleviation and sustainable development.”

Hence, calling on Marcos to reconsider the government’s approach to peace.

The Hague Joint Declaration is a framework agreement signed on September 1, 1992, in the Netherlands containing four-point agendas to resolve armed conflict and establish peace negotiations between GRP and NDFP.

PEPP said that under this framework agreement, “the Comprehensive Agreement on Social and Economic Reforms and other remaining substantive agendas – political and constitutional reforms, and end of hostilities and disposition of forces – a more wide-ranging and all-inclusive range of rights will be respected.”

The church leaders also noted that Former President Fidel V. Ramos’ administration stood out among others as it laid the foundations of peace initiatives with various armed groups, including the GRP and NDFP.

Furthermore, the group demanded a comprehensive and systemic response urging both parties to return to the negotiating table and emphasizing that peace negotiations hold “the potential to mitigate human rights violations and the loss of lives consequent to this armed conflict.

“We are committed to working together for the common advocacy of achieving a just and enduring peace in our country,” the group stressed.