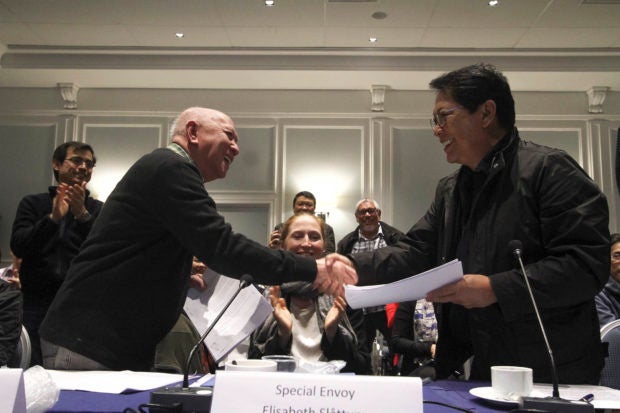 In this photo, taken on Nov. 23, 2017, Fidel Agcaoili (left), chief negotiator of the communist-led National Democratic Front of the Philippines, and his government counterpart, Labor Secretary Silvestre Bello III, shake hands after the signing of supplemental guidelines of the Joint Monitoring Committee that will facilitate the processing of human rights complaints during the third round of peace talks in January 2018. The government has since scrapped the talks.  (Photo by KARLOS MANLUPIG / Inquirer Mindanao)

The International Day of Peace was also observed last Sept. 21.

“It is in this spirit that the Philippine Ecumenical Peace Platform (PEPP) enjoins our people to… call on the government to prioritize the country’s healing,” the group said in a statement.

That healing, it said, can be best exemplified if both parties — the government and the National Democratic Front of the Philippines (NDFP) — will come to an understanding and resume the peace talks.

The negotiations gained momentum during the early months of President Rodrigo Duterte’s administration, but it was eventually terminated by the national government toward the end of 2017.

The PEPP noted that the termination of the talks gave rise to the commission of a series of serious rights violations in various parts of the country, along with more clashes between government troops and the New People’s Army.

“Let us also call on the GRP (government) and the NDFP to join the whole world in this historic occasion by returning to the negotiating table and together put an end to further human rights violations and the loss of life as a result of the conflict,” PEPP said.

The group has acknowledged that the quest for peace between government and the communist rebels “has become elusive again” and achieving it will remain an insurmountable task with the NDFP being branded as a terrorist group by the Anti-Terrorism Council on the basis of the controversial Anti-Terrorism Act of 2020.

“This effectively buried years of laborious and painstaking agreements and gradual steps toward peace,” the PEPP noted.