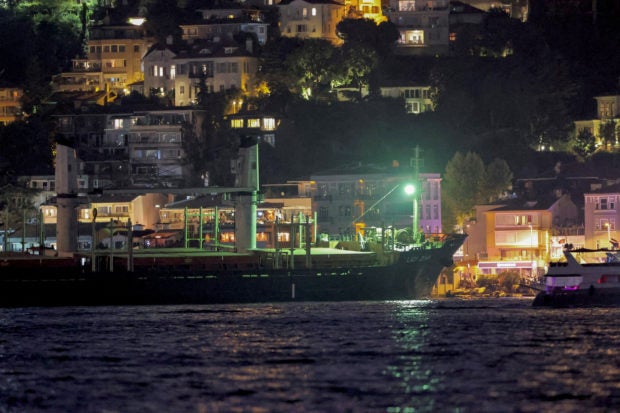 Lady Zehma, a cargo ship carrying corn from Ukraine, is seen grounded and anchored after a rudder failure in the Bosphorus in Istanbul, Turkey September 1, 2022. REUTERS/Yoruk Isik

ISTANBUL — A cargo vessel carrying more than 3,000 tons of corn from Ukraine drifted aground in Istanbul on Thursday, halting shipping on Turkey’s Bosphorus strait in the first such incident since a United Nations-brokered export deal in July.

The Istanbul governor’s office and a shipping firm said the 173-meter (567.59 ft) Lady Zehma was safely grounded and anchored after a rudder failure around 1800 GMT.

No one was hurt and Coast Guards were attending, the office said. Its bow was about 150 meters from shore in the busy Bebek neighborhood, according to a witness and Refinitiv Eikon data.

Ukraine’s grain exports slumped after Russia invaded the country on Feb. 24 and blockaded its Black Sea ports, driving up global food prices and prompting fears of shortages in Africa and the Middle East.

Three ports were unblocked under the deal signed on July 22 by Moscow and Kyiv, and brokered by the U.N. and Ankara.

The Istanbul-based Joint Coordination Centre (JCC) – which oversees the agreement and includes U.N., Russian, Ukrainian and Turkish officials – told Reuters the ship “got stranded during her passage from the strait (and) an emergency boarding operation is underway” by Turkish authorities.

Earlier this week the JCC said the Lady Zehma was cleared to depart Ukraine’s Chornomorsk port for Ravenna, Italy, with 3,000 tons of corn. Turkey’s Tribeca shipping firm said it contained 30,274 tons of corn.

As of Wednesday, some 1.55 million tonnes of grain and other foodstuffs had been exported from Ukraine under the deal, while 139 inbound and outbound voyages had been enabled, the JCC said.

Such incidents are rare on the picturesque Bosphorus, which divides Turkey’s largest city and connects the Black Sea to the Marmara Sea and beyond to the Mediterranean.