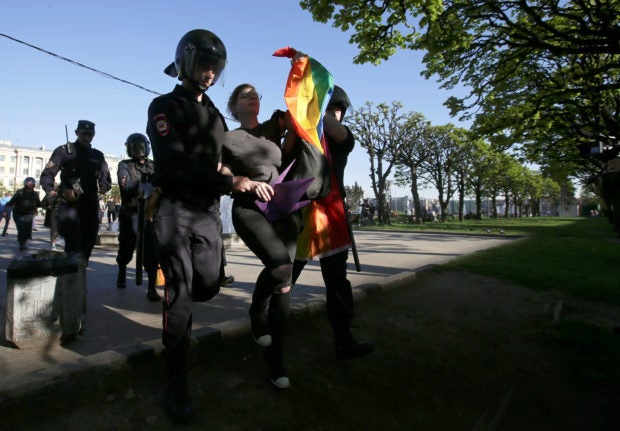 Police officers detain a participant during a rally held by LGBT activists and their supporters on the International Day Against Homophobia, Transphobia and Biphobia in central Saint Petersburg, Russia May 17, 2019. REUTERS FILE PHOTO

Russia is considering doubling fines for exposing children to what it calls “LGBT propaganda” and making any event or act seen as promoting homosexuality an administrative offence, the text of proposed new legislation made public on Wednesday showed.

Russia’s existing “gay propaganda” law, passed in 2013, bans any person or entity from promoting homosexual relationships to children, though lawmakers argued in July the law should be extended to include adults as well.

Under proposed legislation, the penalty for promoting “non-traditional sexual relations” to children would be doubled to 2 million roubles ($33,000) for entities, with the fine increasing to up to 5 million roubles if the offence took place online or in the media.

Individuals could be fined up to 400,000 roubles, while foreigners found to spread “LGBT propaganda” would face deportation from Russia.

“Currently, liability only applies to LGBT propaganda among children. My colleagues on the committee and I would like to extend it to any propaganda of non-traditional sexual relations, regardless of age,” lawmaker Alexander Khinshtein said.

The draft law is expected to be debated following the start of the State Duma’s autumn session, Khinshtein added.

Russian authorities say they are defending morality in the face of what they argue are un-Russian liberal values promoted by the West, but human rights activists say the law has been broadly applied to intimidate Russia’s LGBT community.

TikTok, a video-sharing app, was threatened with a 4 million rouble fine on Tuesday after a Russian court heard it promoted “videos with LGBT themes”, while the country’s media regulator asked a union of publishing houses last week to look at withdrawing all books disseminating “LGBT propaganda” from sale.

Authorities had previously used the law to stop gay pride marches and detain gay rights activists. The latest proposals, if passed, would significantly widen the scope of this law.

In a ranking of Europe’s most LGBT-friendly nations in this year’s “Rainbow Europe” index compiled by ILGA-Europe, Russia was third from last.

How the Pride flag was secretly paraded in anti-LGBTQ Russia

Screening of BTS film axed in Russia for being ‘gay’