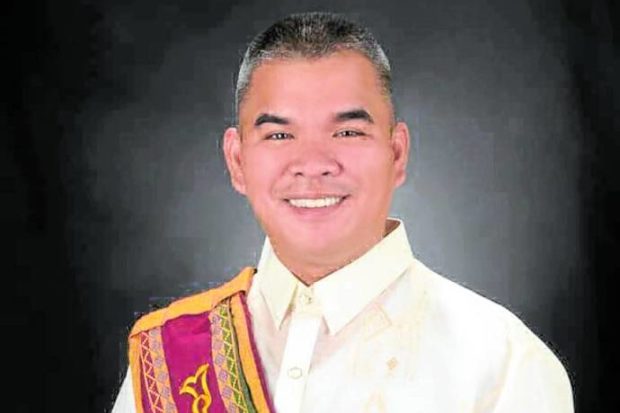 SABLAY RECIPIENT | Police Lt. Reynaldo Samson dons the sablay after being conferred a postdoctoral diploma in public management by the National College of Public Administration and Governance of the University of the Philippines Diliman in 2020. (CONTRIBUTED PHOTO)

COTABATO CITY, Maguindanao, Philippines — Last Sunday, two days before he was slain in an ambush in the municipality of Ampatuan in Maguindanao province, Lt. Reynaldo Samson, the town’s police chief, cheered on a batch of graduate students who completed their master in management in National Security Administration at the Philippine Christian University (PCU).

“May you always be the bastion of peace, security and development for our Motherland. Forever grateful, thankful and hopeful for your career in public service and governance,” Samson wrote on social media.

A security specialist and a former member of the elite Presidential Security Group (PSG), the 40-year-old Samson was barely a year as police chief of the Maguindanao town before he was ambushed and killed as he was out to serve an arrest warrant for a resident in the area.

Samson was assigned in Ampatuan only on Sept. 21, 2021. Before that, he was deputy police chief of the town of Parang, also in Maguindanao.

Samson, a Bicolano, was a faculty in the graduate schools of PCU and of the Pamantasan ng Lungsod ng Muntinlupa (PLMun) while also serving as a lecturer for police recruits and for those taking specialized courses given by the Philippine Public Safety College and the Specialized Training Group of the Philippine National Police.

At PLMun, Samson taught human resource management and transformational leadership in the master of arts in education program.

Born on July 18, 1982, in Naga City, Camarines Sur province, Samson finished a degree in Secondary Education and then Criminology before entering the police force in 2005. He passed the licensure examinations for teachers and criminologists.

He further got his doctor of philosophy degree in peace and security administration at the Bicol University in Legazpi City in Albay province in 2015.

Apart from his stint with the PSG, Samson was also assigned to the Human Resource and Doctrine Development Section of the Police Security and Protection Group of the PNP headquarters.

PNP identifies 6 suspects in ambush-slay of cops in Maguindanao