Biden zeroes in on Pennsylvania ahead of midterm elections | Inquirer News

Biden zeroes in on Pennsylvania ahead of midterm elections 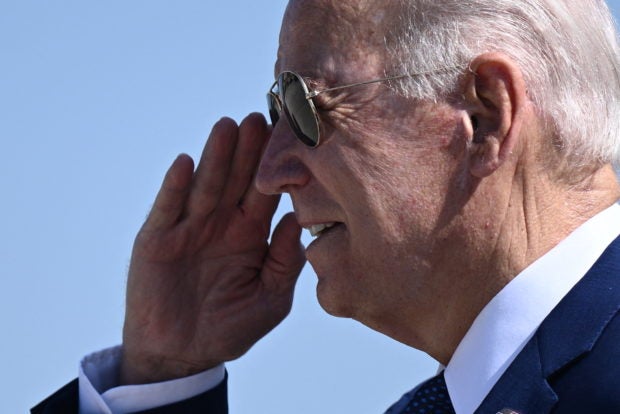 US President Joe Biden salutes while disembarking Air Force One at Joint Base Andrews in Maryland on August 29, 2022. AFP

WASHINGTON — US President Joe Biden will travel three times over the next week to Pennsylvania, including for a speech in Philadelphia Thursday on “the continued battle for the Soul of the Nation,” the White House has said.

Biden is zeroing in on the northeastern state, where he was born, ahead of midterm elections in November in which his Democratic party will fight to keep control of Congress.

The 79-year-old is throwing himself into the political battle for all the seats in the House of Representatives, and a third of the Senate. Both are currently controlled by Democrats.

The outcome of the upcoming Senate election in Pennsylvania could single-handedly decide whether the Democrats retain control of the upper chamber of Congress for the next two years, or whether the Senate flips to the Republican side.

Biden will go first to the city of Wilkes-Barre on Tuesday, where the White House says he will speak on his plan to reduce gun crime in the United States.

Thursday is the big night: he will go to Philadelphia, the city considered the birthplace of the modern United States, for a visit heavy on symbolism.

There, near where the Declaration of Independence and the US Constitution were written, he will deliver the primetime speech on the “battle for the Soul of the Nation.”

It’s a continuing theme: Democrats have focused their midterm campaign on defending societal gains and fighting for democracy itself against an onslaught by Republicans who still support former US president Donald Trump’s false claim that the 2020 election was stolen.

And Biden has regularly attacked the most radical conservatives, whom he recently accused of adhering to “semi-fascism.”

On Monday, September 5, Biden will travel to Pittsburgh, another Pennsylvania city, to celebrate Labor Day.

He is expected to meet with Democratic Senate candidate John Fetterman during this trip.

Trump himself is expected to be in Wilkes-Barre on September 3 — the same place where Biden will be on Tuesday — to support Fetterman’s rival, Republican Senate candidate Mehmet Oz.

The midterms are traditionally hard going for the party in power, and Biden and the Democrats were struggling in the polls over the summer.

But in recent weeks, they have regained some ground, thanks in part to factors such as public concern over access to abortion, a succession of reforms pushed through Congress by Biden, and cooling inflation.

Trump’s own legal problems have not hurt the Democratic push, with concerns growing over documents recently seized from his home in Florida.