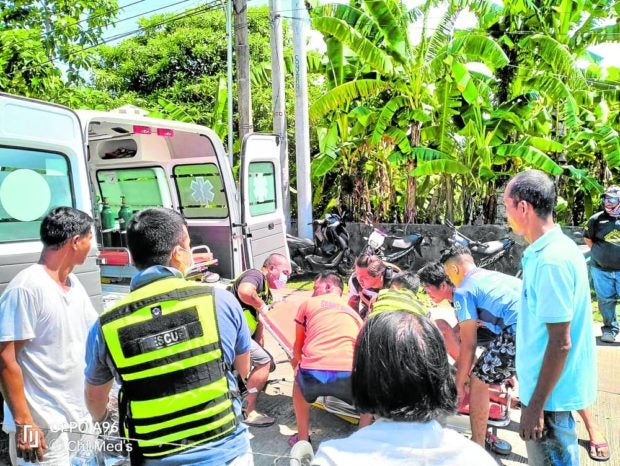 RESCUE EFFORT | Rescuers prepare to take to the hospital one of the four victims who drowned at the Kabilang-Bilangan Reef in Barangay Sicaba, Cadiz City, Negros Occidental, on Sunday.
(Photo courtesy of the Philippine Coast Guard – Cadiz)

Marlyn Aguirre, 33; her son Mack John, 15; and neighbors Remymar Ocon, 31; and Michael John Jacobo Merabe, 13, were all swept away by the strong sea current at around 1 p.m., according to Cadiz City Mayor Salvador Escalante.

The victims, all from Barangay Zone-1 of the city, were rushed to the Cadiz City Emergency Clinic but were declared dead on arrival by the attending physician.

The victims and at least 10 other companions rented a pumpboat for an excursion at the reef’s sandbar, an initial police investigation showed.

While swimming at the sandbar, Mack John was carried away by strong waves, prompting his mother Marlyn to rush to save him but she, too, was swept away by the strong current. Ocon and Merabe also tried to rescue the two but they also drowned.

Escalante said the fatalities were part of a group composed mostly of employees of a local lending firm.

“The area where the drowning happened is not haunted,” said the mayor, as he dispelled this rumor spreading in the city. “People just don’t understand that the current there is strong during high tide,” he added.

Escalante said there were also incidents of drowning in the area in the past due to the strong current.

He said a lot of people go to the sandbar to swim, which measures 3,000 square meters during low tide.

During high tide, however, Escalante said about 80 percent to 90 percent of the reef is covered by water.

“That is why people get on their pumpboat when high tide starts,” he said.

Based on the investigation, Escalante said the victims and their companions were brought to the sandbar at around 8 a.m. by a fisherman who was supposed to be fetched them by around 2 p.m.

Escalante said the fisherman, who knew the area well, should not have left the group at the sandbar.

The mayor was looking for the operator of the pumpboat to get an explanation.

Escalante said the reef will be closed to excursionists but can be used by fishermen and the members of the local Bantay Dagat (sea patrol team).

Commander Joe Luviz Mercurio, head of the Philippine Coast Guard-Northern Negros, said the boat operator will be held answerable for what happened because it has no permit to ferry passengers to the Kabilang-Bilangan Reef .

“We are still trying to locate the operator and owner of the boat as they can be held answerable for bringing the victims to the area,” he said.