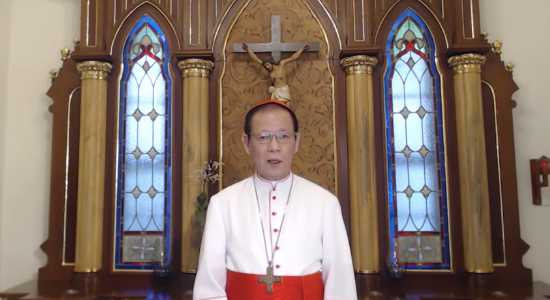 MANILA, Philippines — Manila Archbishop Jose Advincula called on the Church to stand in greater solidarity with the marginalized sectors as he underscored the “dark and wide gap” between the Church and the poor.

In a report by the Catholic Bishops Conference of the Philippines (CBCP) news agency, Cardinal Advincula, in his homily at the Pontificio Collegio Filippino’s chapel in Rome on Sunday, stressed that a vast chasm existed between the two that had to be bridged.

“Our poor and marginalized brethren feel that their views and values are disregarded in our Church communities and organizations,” he said.

He said he realized this during a recent national synodal consultation held in Tagaytay City in July.

“We must immerse ourselves in the life of the poor, be friends with them, journey with them, empower them for the mission, include them in the life and activity of the Church and advocate for their dignity,” Advincula said.

Advincula is in Rome after taking part in a two-day extraordinary consistory called by Pope Francis starting August 29 and the consistory to create 20 new cardinals in St. Peter’s Basilica on August 27.

Earlier, members of the CBCP conceded their shortcomings, which are why the nation is “far from our dream of a Church of the poor.”

“We saw gaps and closed doors in our work of evangelization. We saw shadows,” read a statement released by the Church leaders following the National Synodal Consultation held in Tagaytay City.

They then vowed to “open doors for us all to go out and set forth once again for mission” and “to seek out those who are far, different, excluded.”

RELATED STORIES:
Manila Archbishop Advincula will be Cardinal-Priest of Church in Rome