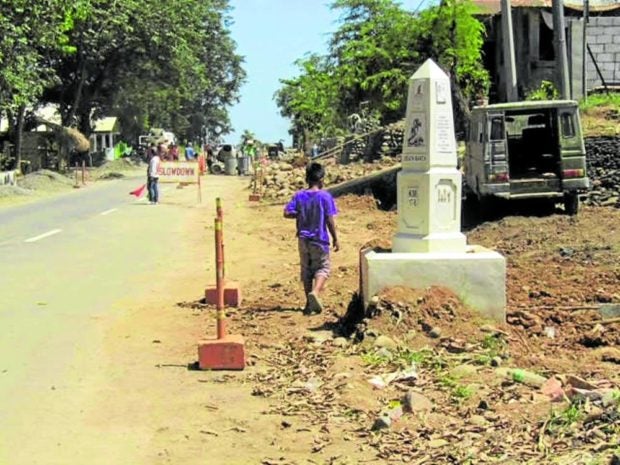 NOWHERE TO GO | This marker in Bagac, Bataan, is one of several obelisks put up on private donations to mark the Death March during the Japanese occupation of the Philippines in World War II. The markers had been either displaced by the government’s road-widening projects or hit by passing vehicles since these were along national roads in Bataan, Pampanga and Tarlac provinces, where the tragic journey of captured Filipino and American soldiers took place. (CONTRIBUTED PHOTO)

CITY OF SAN FERNANDO, Pampanga, Philippines — Some 135 bikers on Sunday retraced the route of the Death March of 1942 to raise funds to find a new place for the historical markers of the grim event that were displaced by road-widening projects.

Dubbed “Ride for Valor,” the ride started with 120 bikers who left Kilometer Zero in Mariveles town in Bataan province and linked up with 15 others in an old train station in the City of San Fernando in Pampanga province, where the Wartime Heritage Guild reenacted the tragedy in a skit.

Philippine Veterans Bank (PVB) organized the fundraising for the Filipino-American Memorial Endowment (Fame), on top of allotting 20 percent of its annual net income to World War II veterans and their families.

Fame has put up 138 markers along the 160-kilometer route on donations since 1986, it said on its website.

But Fame said it found 10 markers in Mariveles town and four others in Limay town, both in Bataan, to have been dislocated by government road-widening projects.

“We are satisfied with the turnout also in terms of awareness it has generated,” said Mike Villa-Real, vice president for communications of PVB.

The “Ride for Valor” was able to raise roughly P50,000, Villa-Real said on Sunday afternoon.

“Replacing an entire obelisk costs at least $350 (P15,400). Total cost to install a porcelain tile plaque in an obelisk is about $200 on average (P8,800). Cleaning an obelisk averages $25 for each obelisk (P1,000), including materials and travel,” Fame said, adding its goal was “to raise at least enough money to annually provide for the maintenance and replacement of 20 percent of the plaques.”

Eighty years ago, the Death March began on April 9, 1942, after American military officials surrendered to the Imperial Japanese Army some 65,000 Filipinos and 15,000 Americans who fought on extended time with diminishing provisions in Bataan and Corregidor against Japanese colonization.

The total distance marched from Mariveles to San Fernando and from the Capas Train Station to Camp O’Donnell was recorded as between 96.6 and 112.0 km. According to historical accounts, Filipino and American soldiers were herded into cramped sugar wagons at the train station to complete the 160 kilometers to Camp O’ Donnel in Capas, Tarlac.

There were also differing reports of fatalities prior to reaching Camp O’Donnell which said the Death March was deadly to around 5,000 to 18,000 Filipino soldiers and 500 to 650 Americans.