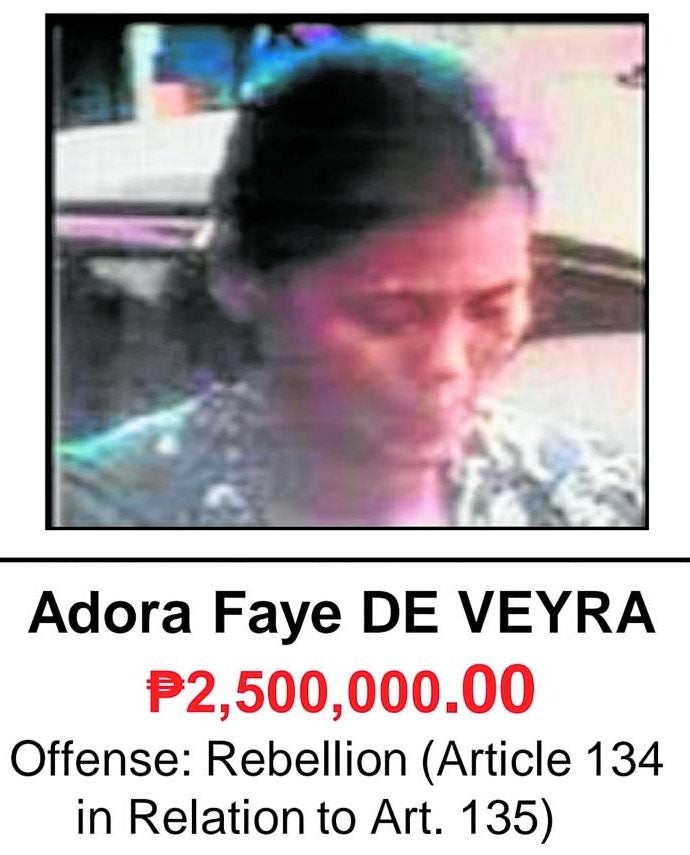 HEFTY BOUNTY Adora Faye de Vera, 66, is known to her friends as “Dong,” but authorities say her aliases include “Boying,” “Ato” and “Vid.” Wanted for multiple murder and with a P2.5-million reward on her head, she was arrested in a house on Maalalahanin Street in Quezon City on Wednesday, August 24, 2022. She is now detained at Calinog police station in Iloilo. —PNP-PIO PHOTO

Adora Faye de Vera, one of the faces of women’s struggle in the Philippines who endured rape and torture during martial law under the Marcos dictatorship, was arrested by police agents in Quezon City on charges of multiple murder on Wednesday.

The 66-year-old De Vera, “Dong” to friends but also known to authorities as “Boying,” “Ato” and “Vid,” was flown to the police station of Calinog town in Iloilo, where she remains in custody, her third time in detention since the 1970s, but now under the administration of a second President Marcos.

A team led by intelligence operatives from the Western Visayas regional police office captured De Vera, an elder sister of Commission on Higher Education (CHEd) Chair Prospero de Vera, in a house on Maalalahanin Street at Teacher’s Village East at 2:40 p.m., according to the police.

She was arrested on the strength of a March 10, 2006 warrant issued by Judge Guilljie Delfin Lim of Iloilo City Regional Trial Court Branch 22

De Vera is facing nonbailable charges of multiple murder and multiple frustrated murder with the use of explosives, particularly antipersonnel land mines outlawed by international conventions on warfare.

She is also accused of rebellion in a separate case.

Announcing her arrest during a visit to Camp Olivas in San Fernando City, Pampanga on Thursday, the Philippine National Police chief Gen. Rodolfo Azurin Jr. described De Vera as a “ranking officer” of the Communist Party of the Philippines (CPP).

A P2.5-million bounty had been placed by the defense and interior departments on De Vera’s head, based on a list of 73 “communist terrorist group personalities with reward” issued by the PNP.

“I am pleased to announce the capture of another ranking officer of the communist terrorist group operating in Western Visayas who is wanted by the court to stand trial for the crime of multiple murder,” Azurin said.

Citing police records, Azurin said De Vera was a staff officer of the general command of the CPP, and its armed and political wings, the New People’s Army (NPA) and the National Democratic Front of the Philippines.

She was also tagged as the secretary of the central front of the CPP-NPA regional committee in Panay.

De Vera was also alleged to be the “party wife” of Jessie Lipura, alias “Bren,” a member of the CPP-NPA central committee, according to the PNP.

No family member or lawyer has come to visit De Vera since she was turned over to the Calinog station at 9:35 p.m. on August 24, according to Western Visayas police spokesperson Lt. Col. Arnel Solis.

In a statement early on Friday, her brother Prospero, the CHEd chair, confirmed their relationship but distanced himself from her alleged crimes.

According to him, they have not spoken to each other for more than 25 years, since she was said to have rejoined the underground movement.

While he “hoped and prayed for her safety and good health,” Prospero emphasized that “I do not share her views nor support her actions.”

“I fully support the administration of President Ferdinand ‘Bongbong’ Marcos Jr. in its efforts to end the communist insurgency that has destroyed so many lives and property,” he said. “I will let the law take its course in resolving the charges against her,” said Prospero, who was reappointed by the President to a fresh four-year term as CHEd’s head.

Adora Faye de Vera has been arrested twice previously, in 1976 and in 1983, but her experience during her first incarceration is more familiar to historians and human rights advocates.

Only 20 years old at the time, De Vera, a graduate of the Philippine Science High School, along with Rolando Federis, then 24, and Flora Coronacion, then 18, was abducted by plainclothes military men at 11 p.m. on Oct. 1, 1976, in Lucena City, on a train bound for Bicol.

The three were brought to “an old building that looks like a beer house” by the men, who, De Vera learned later, were elements of the 2 Military Intelligence Group (2MIG), the 2 Constabulary Security Unit (2CSU) and the 231st Philippine Constabulary (PC) Company.

According to De Vera’s statement published in a 1981 report of Amnesty International, they were dragged from the train to a waiting ambulance which took them to an unlit three-door apartment somewhere in Lucena City.

They could not exactly tell where the apartment was located because their heads had been pushed down into the laps of the men and their eyes covered during the trip, she said.

They were transferred from one “safe house” to another where they were tortured while being interrogated. The soldiers pressed lit cigarettes on their bodies and, for hours, made them stand naked before an air conditioner running on full blast, De Vera recalled.

She was soon separated from her two companions and on Nov. 12, 1976, the military tortured her again and threatened to kill her companions if she refused to admit that she was a member of the NPA.

“Your two companions were under military custody. They did not escape, but now they are missing. You know the implications,” De Vera quoted one of the soldiers as telling her.

De Vera said soldiers raped her several times up to Dec. 16, 1976. When she got pregnant, the military forced her to undergo abortion administered by her torturers. De Vera was released on June 30, 1977.

She was arrested again in October 1983, after she was shot on the leg during a military encirclement in Bicol. The events up to her eventual release are not clear though she granted interviews about her martial law ordeal.

The case against De Vera and several ranking leaders of the NPA in Panay region stemmed from the ambush of military personnel on Nov. 19, 2005 at Barangay Mambiranan in Calinog town.

The military said soldiers were about to return to camp on board a convoy of two trucks after patrol operations when a land mine exploded.

Nine soldiers belonging to the 47th Infantry Battalion and the First Scout Ranger Battalion of the 3rd Infantry Division of the Armed Forces of the Philippines were killed, while 18 others were wounded in the firefight that lasted for about an hour.

“This arrest shows that the police are relentless in tracking the remaining wanted persons in the region. After seventeen years, justice is finally given to the victim soldiers.” he said.

—WITH REPORTS FROM INQUIRER RESEARCH AND JOEY MARZAN, INQUIRER VISAYAS