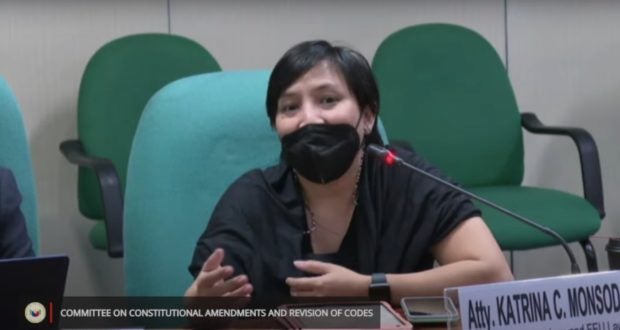 Lawyer Katrina Monsod speaks during the hearing of the Senate committee on constitutional amendments. Image from Senate livestream

MANILA, Philippines — The country needs the protectionist provisions of the 1987 constitution because Filipinos are “very friendly to foreigners,” and that “we treat them a little better than ourselves,” a law expert said on Friday.

During the Senate committee hearing on constitutional amendments, law professor Katrina Monsod said that there are other ways to attract foreign direct investments without amending the constitution.

Monsod cited the Filipinos’ trait of being more hospitable and friendly to foreigners which had often been to their own detriment.

“For example, we are not protectionist, yung takot sa dayuhan. Kasi ‘yung mga Pinoy may tendency na, we are very friendly to foreigners and minsan we let them get away with more — we treat them a little better than ourselves,” said Monsod, whose parents are Atty. Christian Monsod, one of the framers of the 1987 Constitution, and economist Solita “Winnie” Monsod.

(For example, we are not protectionists, like we are afraid of foreigners. Filipinos have a tendency to be very friendly to foreigners, and we let them get away with more — we treat them a little better than ourselves.)

“So we do have a little protectionist [provisions] kasi may history naman eh, may basis naman, na matakot na we [would be] overran [if] we give them too much,” she added.

(So we do have a few protectionist provisions because there is a history and basis to be afraid that we might get overran if we give them too much.)

The 1987 Constitution provides for limitations to foreign ownership of public utilities and businesses to only 40 percent, while Filipino citizens setting aside the other 60 percent exclusively for Filipino citizens or corporations.

Monsod, however, said there are ways to allow foreign direct investments in the country without amending the constitution.

“If you look at other World Bank reports, you just don’t read one; you read many, right? They talk about, when they say about foreign direct investments, they don’t talk about limits and shares; they talk about why they’re not coming in: labor, contracts, interconnection of the internet.”

“It’s all of those other things. It’s not shares, it’s not shares of stocks. There are ways that legislatures itself can change it,” she continued.

‘We’re doing this wrong for a long time’

Another resource speaker, however, said it is now time to amend the 1987 charter.

According to Orion Perez Dumdum, principal co-founder of pro-constitutional reform Correct movement, even socialist countries like Vietnam and China have started to liberalize and accept foreign direct investments.

“They [Vietnam and China] became very much in the lead when it comes to foreign direct investments,” he added.

Dumdum even noted that due to Vietnam’s relatively lax requirements for foreign businesses, the Southeast Asian country has surpassed the Philippines in terms of GDP per capita.

“Everyone used to look up to us, but look, natalo na tayo ng Vietnam,” he said.

Dumdum also said the Philippines should use Malaysia as a model in its shift to federalism.

One of the most prosperous countries in Southeast Asia in terms of GDP per capita, Malaysia is governed under the federal-parliamentary system.

“So Malaysia is a model we should look at, because we have a lot of similarities with the majority of the population, the bumiputras,” he said, referring to the native Malays.

Panel chair Senator Robinhood “Robin” Padilla suspended the second hearing of his committee on Friday afternoon but said this will not be the last hearing.

The first meeting of the Senate committee on constitutional amendments for the 19th Congress began Thursday, August 25.

RELATED STORIES
Monsod: Constitution is not the problem, it’s part of the solution