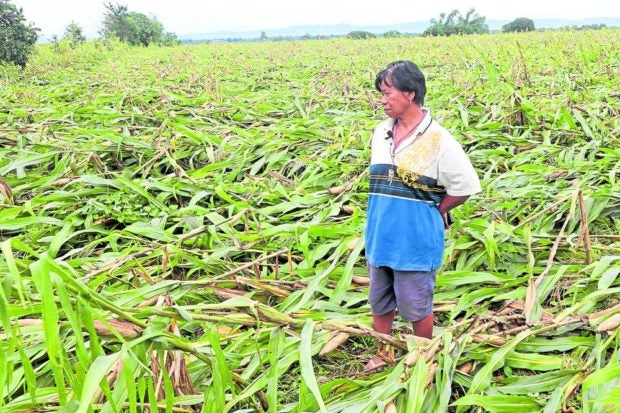 MANILA, Philippines — The estimated worth of agricultural damage and losses caused by Severe Tropical Storm “Florita” rose to P19.1 million, said the Department of Agriculture (DA) on Thursday.

This is over six times the amount reported by the DA on Wednesday, which was only P3 million.

According to the DA’s latest report, the latest cost of damage translates to a total volume loss of 1,132 metric tons (MT), affecting 1,286 farmers and 1,833 hectares of agricultural land.

Rice crops were still the most affected commodity in the provinces of Ilocos Norte, Aurora, and Zambales, with a total volume loss of 699 MT worth P11.71 million.

Corn was also hit with a volume loss of 430 MT, or P7.31 million worth of damage in the provinces of Kalinga and Ilocos Norte.

Despite the huge jump, DA assured the public that the movement of vegetable products in the Cordillera Administrative Region  was not affected since no significant road networks were affected by “Florita.”

“Thus, there are no changes in the volume traded at the centers in La Trinidad. Supply and prices of basic commodities remain stable in regions affected by ‘Florita,'” the DA said.

The department then said it is still assessing the damage and losses brought by the cyclone in the agri-fisheries sector.

Further, DA said it continues to coordinate with local government units and concerned agencies for the impact of “Florita,” as well as available resources for interventions and assistance.

Meanwhile, the DA assured that it would provide the following assistance to affected farmers and fishers:

According to the Philippine Atmospheric Geophysical and Astronomical Services Administration (Pagasa), “Florita” has since left the Philippine area of responsibility after affecting over 47,000 individuals, killing three and injuring four, as it ravaged parts of Northern and Central Luzon early this week.