Zelensky: Ukraine will take back Crimea when it chooses | Inquirer News

Zelensky: Ukraine will take back Crimea when it chooses 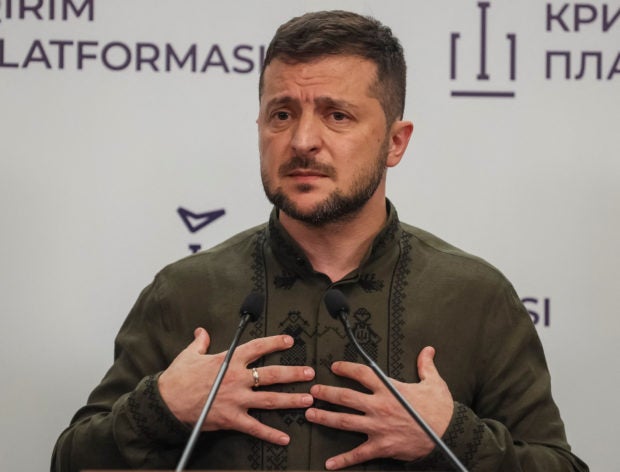 KYIV — President Volodymyr Zelensky vowed on Tuesday Ukraine would recapture its annexed peninsula of Crimea from Russia when it chooses and that Kyiv will not consult other countries before doing so.

Zelensky made the comments at a news conference in Kyiv after the leaders of dozens of countries and international organizations took part – most of them by video – in Crimea Platform, a forum hosted by Ukraine focused on the peninsula.

“We will take back Crimea- it is our territory. We will do this in any way which we decide. We will decide this by ourselves, without consultation with any other country in the world,” he told reporters.

Russia annexed Crimea in 2014 years before launching its full-scale invasion in February this year, seizing chunks of Ukraine’s southern Kherson and Zaporizhzhia regions.

Ukraine has used Western-supplied weapons to target Russian supply lines and has pledged to conduct a major counteroffensive in the south.

There have been a spate of explosions in Crimea in recent weeks that Ukraine has not claimed responsibility for even as it has coyly hinted its forces have played a part.

In his comments on Tuesday, Zelensky addressed the crisis at the Russian-held nuclear power plant in Zaporizhzhia that has been hit by shelling in recent weeks, prompting calls for a mission of the International Atomic Energy Agency to the site.

Russia has proposed that the mission travel to the site of the nuclear power plant from annexed Crimea, a proposal that Zelensky said would be contrary to Ukraine’s laws.

“We know there were proposals for IAEA representatives to travel through occupied Crimea. We said that if this happens, then the IAEA will not (be able to) come to (Ukraine) anymore, according to our laws,” said Zelensky.

Six months into the war, Ukrainian refugee agonizes about returning

US embassy issues new security alert for Ukraine, urges US citizens to leave