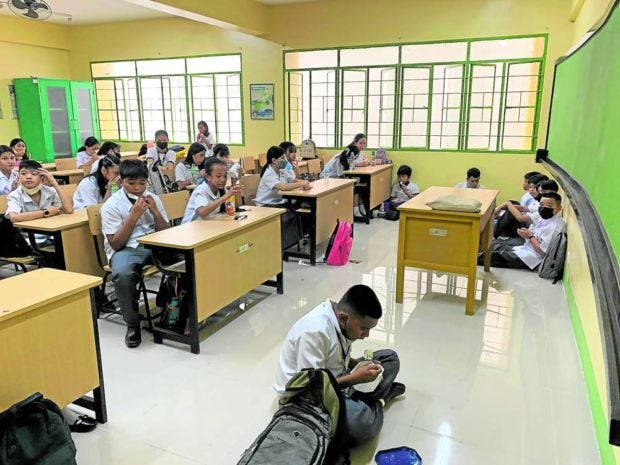 DAY ONE SITUATION | Due to a lack of chairs, seven Grade 7 students take their snacks on the floor inside their classroom at Jose Abad Santos High School in Manila in this photo taken around 10 a.m. during recess on Monday, the first day of the school year. (Photo by JANE BAUTISTA  / Philippine Daily Inquirer)

MANILA, Philippines — The Inquirer stands by the veracity of the video posted on social media by its education beat reporter Jane Bautista on Monday, the opening of classes, about the situation in a classroom at Jose Abad Santos High School in Binondo, Manila.

The news desk takes issue with the Manila Public Information Office’s (MPIO) statement issued eight hours after Bautista’s report, calling the post “fake news” and saying the students were made to sit on the floor for a “psychosocial activity” as part of their “general orientation.”

In reaction to the MPIO statement on Tuesday, the president of the Jose Abad Santos High School Faculty and Employees Association, Nestor Reyes, issued this statement in Filipino:

“The situation captured on video that has now spread on social media cannot be considered fake news. It is just one of the problems faced by the teachers, students, parents and the school administration on the first day of classes. It did not just happen now but in past school years. Let’s take a broader view of the problem instead of spreading the notion that it was fake news.’’

The statement about “psychosocial activity” in the classroom was not mentioned by the teacher to the Inquirer reporter when she entered the room until she left after 15 minutes. The Inquirer counted 27 chairs and 43 students.

In fact, when the teacher was asked if the students were on the floor because there were not enough chairs, she said yes. There was another teacher present who heard that answer and can attest to it.

The school principal later explained to the Inquirer, hours after the video was posted, that “there was just a miscommunication with the janitors who were cleaning but the chairs are enough.”

The teachers, the principal said, “just lacked the initiative to get them, but the rest, they have enough chairs.” This statement was included in the story that came out the following day.

The MPIO statement posted on Monday night was later taken down by that office on Tuesday afternoon.