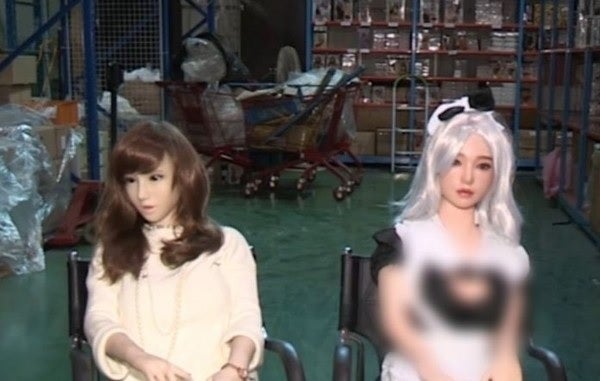 SEOUL — Late last month, residents of an apartment complex in Incheon were rattled by the discovery of a headless, mutilated torso, which turned out to be a silicone sex doll.

It was found in the building‘s parking lot, near a car that had a damaged roof. The vehicle’s owner, suspecting that the mannequin must have fallen from a height and landed on the car, reported it to the police. An investigation to identify the owner of the doll is currently ongoing.

The news of the incident sent shockwaves through not just the neighborhood but across the country, where sex and sex toys are still considered taboo. It sparked questions about the national sex doll market, which seemed to have survived despite years of stifling restrictions and a virtual import ban.

Park Do-hyun, a 29-year-old woman, living in the same city, not very far from where the doll was found, said, “I was shocked by the fact that somebody in my city has been using it at home.”

Kwak, a 36-year-old freelance worker living in Uijeongbu, Gyeonggi Province, has recently bought a 160-meter-tall doll for 1.5 million won ($1,150) from an online store “Love Love Doll.” He said it was to ease his loneliness.

“Many sex doll shops offering trial services have been shut down in my neighborhood and in other cities, too. Even though they‘re expensive, I think it’s the only option left for me.

”A doll is just a doll. Using sex dolls at home causes no public harm, so I think they should be treated the same as other sex toys,“ he said in an interview with The Korea Herald.

The trial-based sex doll shops he referred to are a new form of business that have emerged over the last few years, offering customers a chance to enjoy sex dolls in a private space. They were short-lived, however, as residents and business owners in nearby areas rallied to have the police crackdown on them.

In one of the latest and largest measures, police authorities in Seoul and Gyeonggi Province in November last year inspected a total of 96 such shops in the greater Seoul area for any violation of rules and laws. This resulted in the permanent closing of all 96 locations.

Under current laws, sex dolls are not illegal, and those shops did not violate the rules with the service itself. The police, however, used other breaches of the law such as illegal advertisements, building regulation violations and failure to comply with juvenile protection rules to force the businesses to close.

It was after this crackdown that more people started considering a purchase of their own doll, and a secondhand market emerged, according to a person who runs a sex doll company.

”Since I started the business in 2019, the number of customers has gradually increased. The prolonged COVID-19 pandemic and social distancing rules further boosted sales,“ said the person who wished to be identified only by his surname Lee. 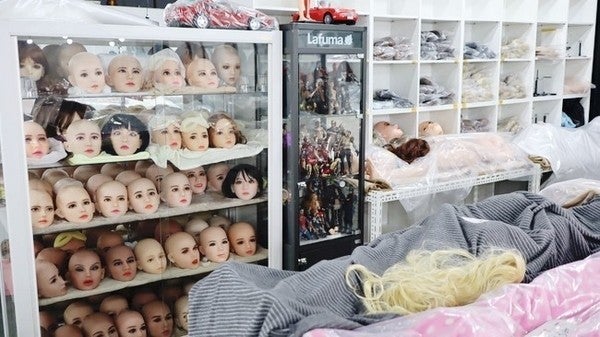 The inside of the factory that makes sex dolls that are modeled on female bodies operated by a sex doll producer Love Love Doll. (Courtesy of Love Love Doll) 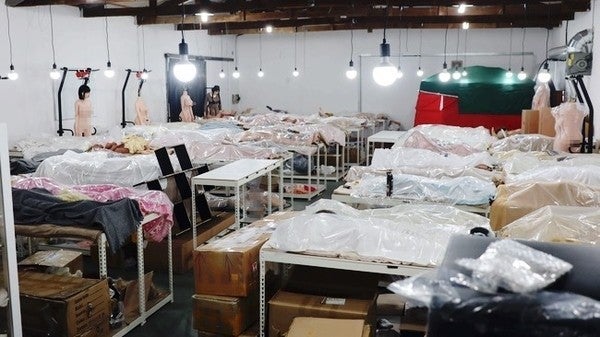 The inside of the factory that makes sex dolls that are modeled on female bodies operated by a sex doll producer Love Love Doll. (Courtesy of Love Love Doll)

His company, My Love Doll, produces sex dolls and sells them via its online and offline shops. The firm‘s physical store is in Daegu, some 300 kilometers southeast of Seoul, he said. Due to strict import restrictions, most sex dolls traded here are local products, he explained.

The price of complete dolls made out of silicone ranges from 1 million won-5 million won, depending on their size and quality. The majority of the customers are males in their 40s and 50s, according to Lee.

Secondhand trading is also a rising trend. Many buy or sell used dolls through the company’s blog on Naver, he added, with those seeking to sell posting photos of their doll.

He denies claims that sex dolls objectify women, arguing that they are not just for men.

”Male sex dolls also exist, but the demand for them has been relatively low. The main customers are male sexual minorities,“ he said.

”They are just one way to fulfill people‘s sexual desire. Regardless of gender, many customers have increasingly considered them as a companion.“

Dolls made outside of Korea often include more advanced features, such as responding to touch. These dolls, however, have been virtually banned from import here.

Bringing in sex dolls from overseas is technically not illegal, but the customs authorities have refused to give them clearance, citing concerns over a negative impact on ”public morals.“

Legal challenges to this policy, however, have been mounting and the ban has been partially lifted as of July.

Starting last month, the Korea Customs Service permitted the import of sex dolls that depict particular human body parts but not whole bodies. The authorities said that whether to allow in complete-bodied ones will be decided later, depending on the court’s future rulings.

The customs agency‘s change of stance — albeit only on certain types — came nearly three years after a landmark ruling in 2019 in favor of a sex doll importer.

The Seoul High Court ruled in favor of an importer of a sex doll who sought to nullify Incheon Regional Customs’ decision not to permit clearance. The court ruled that the import of sex dolls differed from that of pornography since the dolls could have other purposes outside improper and obscene ones.

The Supreme Court upheld the lower court‘s ruling in June of that year. Later that year, the highest court ruled that imports of childlike sex dolls should be banned as they could lead to the perception of children as sexual objects.

After the rulings, a heated debate erupted over sex dolls, with many voicing concerns over a possible surge in imports.

The customs authorities, mindful of public sentiment, have adhered to their previous stance, giving clearance only to the specific doll in the case mentioned above.

According to customs data, the number of people applying for customs clearance on sex dolls rose sharply following the 2019 rulings.

In 2017, there were only 13 female sex dolls subjected to customs review, but it rose 24-fold to 307 in 2021, just five years later. In total, 1,057 related products were subject to the customs policy. All but the one purchased by the plaintiff of 2019 trial were blocked.

A sex shop without the stigma