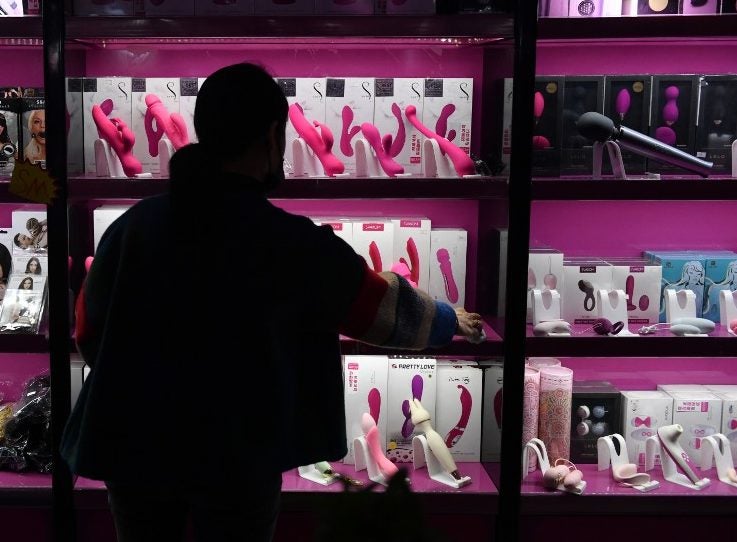 This photo taken on October 14, 2020 shows manager Li Hong in front of a display of sex toys at her sex store in Beijing. – Demand for sex toys is increasing in China, the world’s biggest exporter of bedroom aids, partly thanks to the coronavirus and also a product of a wider cultural shift in attitudes towards sex by a younger and more open-minded demographic. (Photo by GREG BAKER / AFP)

BEIJING, China — Single and locked out of Beijing’s dating scene by the pandemic, Amy was encouraged by other women in online chatrooms to find a solution to her enforced abstinence — a sex toy.

“Before, I felt a bit scared and embarrassed to use them,” said the 27-year-old, who did not wish to disclose her real name. “Then I discovered a new world.”

Demand for sex toys is increasing in China, which is already the world’s biggest exporter of bedroom aids.

That is partly thanks to the coronavirus, which brought prolonged separations for partners due to lockdowns, and lengthy closures of public entertainment venues that ruled out hook-ups.

But it is also a product of a wider cultural shift in attitudes towards sex by a younger and more open-minded demographic.

“Quite a lot of women… who are sexually active have a very open attitude towards using sex toys,” Yi Heng, a prominent sex and relationships advice blogger, told AFP.

“They see it as very natural and normal.”

Yi, who has over 700,000 followers on the Twitter-like Weibo platform and runs discussion groups on the topic, believes Chinese women are driving the market.

President Xi Jinping has pushed for a “clean and righteous” cyberspace, and the Chinese government has sought to promote marriage and traditional family values as a way to revive flagging birth rates.

But China’s divorce rate reached a record high of more than 3.1 million in the first nine months of 2019 — a sign of change in societal values.

As they become increasingly empowered over what they want in the bedroom, women in their thirties and younger are getting more comfortable with the idea of using sex toys.

“Sometimes they don’t find the orgasms and pleasure they really want, maybe because men’s skills in bed are not good enough,” explains Yi.

“Women are then perhaps more motivated to find a way to please themselves.”

But, driven mainly by female and millennial consumers, the country’s nascent sex toy market is valued at over 100 billion yuan ($14.7 billion), according to Chinese research firm iiMedia.

Queries for the keyword “sex toys” on the Baidu search engine surged between January and June, according to Steffi Noel, an analyst at Shanghai-based market research firm Daxue Consulting.

But she added that that the spike in domestic demand during the pandemic may not result in major long-term growth.

“The people who bought (sex toys) during the pandemic were mainly first-time buyers,” said Noel, and for “70 percent” of them it will likely be a one-time purchase.

The surge in orders came from “France, Italy and the US,” said Noel, “mainly for vibrators and sex dolls.”

In the first half of 2020, exports jumped by 50 percent year-on-year, Chinese e-commerce giant AliExpress said, as factories raced to meet demand in a world stuck at home due to the virus.

The United States, Germany and Japan are major destinations for dolls which go for over 2,000 yuan (nearly $300) each.

“Now people are more open, and they don’t think these objects are very weird.”

Amy says she hopes Chinese society will gradually become more accepting of sex toys, and that their use will eventually be seen as normal.

“I hope that everyone can experience this kind of happiness,” she said.

“It is something you can give yourself and is very easy to acquire.”

Villar to be included in corruption probe if evidence warrants, says wife