PH Coast Guard gets P11 million equipment donation from US 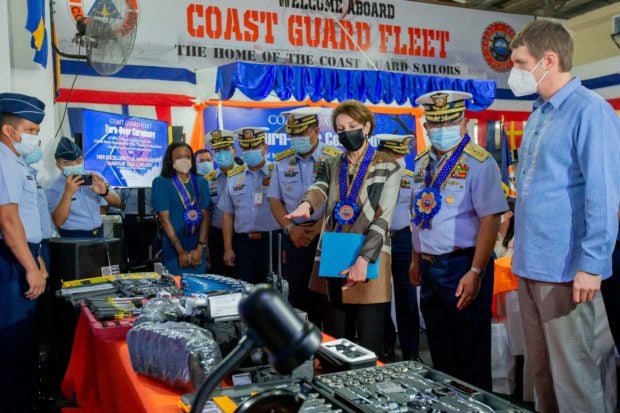 The United States government donates equipment worth P11 million to the Philippine Coast Guard at the latter’s headquarters in Manila City on August 22. (Photo courtesy of US Embassy)

MANILA, Philippines — The Philippine Coast Guard (PCG) received P11 million worth of equipment from the United States (US) to strengthen its maritime law enforcement efforts.

On Monday, the US government donated maritime tactical gear and vessel maintenance equipment through the Department of State’s Bureau of International Narcotics and Law Enforcement Affairs.

“The PCG is on a promising trajectory, and we are committed to support them in achieving their vital and ambitious development goals and in responding to a wide range of maritime challenges,” US Ambassador to the Philippines MaryKay Carlson said during the turnover ceremony at the PCG headquarters in Manila.

“The United States government has consistently shown its support for this organization throughout the years. They are one of the most vocal advocates for improving [PCG] capabilities, in addition to the funding for education and training of the men and women of the PCG,” he said.

Currently, the PCG and the US Embassy are teaming up to prepare for the visit of the US Coast Guard Cutter Midgett to the Philippines next week.

EU gives €1.7M; other countries pitch in aid after ‘Odette’ onslaught in PH