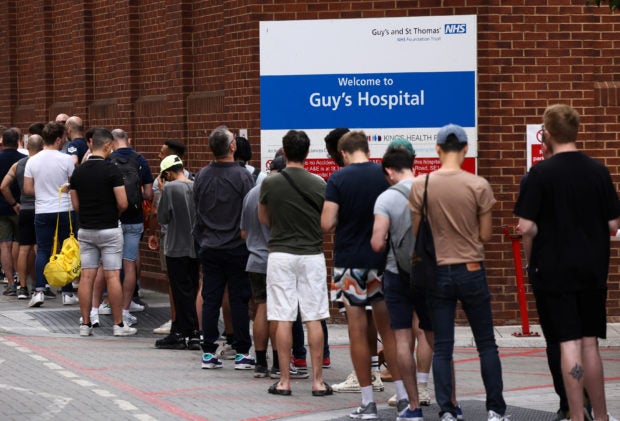 People queue up to receive monkeypox vaccinations during a pop-up clinic at Guy’s Hospital in central London, Britain, July 30, 2022. REUTERS

LONDON — Britain is following the United States and Europe in making the most of limited supply of the monkeypox vaccine by administering smaller doses of the shot, health officials said on Monday.

Three National Health Service sites are set to begin a pilot testing of the so-called fractional dosing approach, which involves using one vial of the vaccine to administer up to five separate doses – instead of a single dose – by injecting a smaller amount in between layers of the skin (intradermal injection).

The Bavarian Nordic vaccine – called Jynneos, Imvanex and Imvamune, depending on geography – was designed to be injected into a layer of fat beneath the skin, known as a subcutaneous injection.

The approach is backed by a study involving about 500 adults, which compared the performance of the vaccine given either intradermally or subcutaneously, as two doses given about a month apart.

In recent weeks, both U.S. and EU regulators have backed the fractional dosing approach to stretch out scarce supplies.

The feasibility of the approach will be evaluated at pilot clinics in Chelsea and Westminster NHS Trust, Central and North West London NHS Foundation Trust, and Locala Health and Wellbeing in Greater Manchester, the UK Health Security Agency (UKHSA) said.

More than 40,000 confirmed cases of monkeypox – including a handful of deaths – in over 80 countries where the virus is not endemic have been reported since early May. Up to Aug. 15, there were nearly 3,100 confirmed cases in the UK.

The UK has ordered 150,000 doses of the vaccine, a UKHSA spokesperson told Reuters earlier this month.

About 50,000 doses have already arrived, while the rest are expected next month.

Due to the limited vaccine stock, the post-exposure offer of vaccination is now being reserved for those close contacts who are at highest risk of severe illness, the UKHSA added on Monday.

PH working with US gov’t to secure monkeypox vaccines

Read Next
Brazil to display heart of monarch who declared independence in 1822
EDITORS' PICK
Reignite your passion with the vivo Y35
Karding damage to infrastructure at P23M
Bongbong Marcos says PH ‘open for business’ with new Clark Airport terminal
UNFPA Philippines Career Opportunities
Sierra Madre stands up to Karding, but needs protection vs the humans it saves
House energy committee chair Arroyo bats for cheap electricity
MOST READ
Angelica Panganiban ‘duguan, sugatang mom’ one week into breastfeeding
Badoy not with Office of the President, NTF-Elcac, under Marcos admin — solon
Cop yields after killing wife, companion in Oriental Mindoro
LPA enters PAR, may develop into tropical depression
Don't miss out on the latest news and information.