1 dead in bus-truck collision in Albay 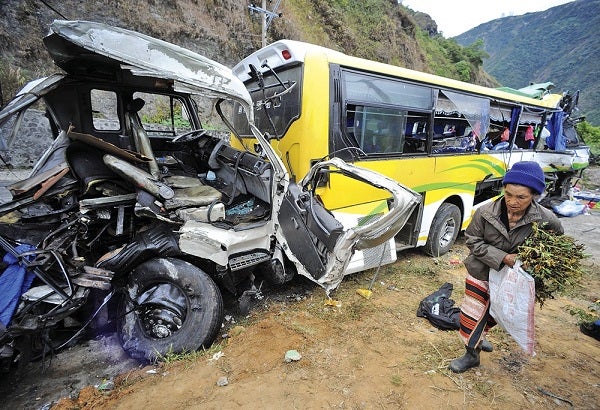 LIGAO CITY—A passenger of a ten-wheeler truck died early morning Tuesday, August 23, after the vehicle collided head-on with a bus in Daraga town in Albay province.

Investigation reveal that the vehicles were traveling in opposite directions when the truck’s right front wheel exploded at 1:15 a.m., causing its driver to lose control of the vehicle. The truck encroached into the lane that the Yutong Passenger Bus (Elavil tours) was traversing at Barangay Mayon, causing the collision.

Santos died on the spot from the impact, while an undetermined number of bus passengers were taken to the Bicol Regional Training and Teaching Hospital for treatment of injuries.

The police said the ten-wheeler truck driven by Sofronio Cantong, 25, of Mondragon town in Northern Samar, came from the Zamboanga Peninsula region in Mindanao and was traveling to Metro Manila when the accident happened. It was not clear if the vehicle was carrying or transporting any cargo.

The bus driven by Arnel Roxas, 44, of Sariaya town in Quezon, was transporting passengers to the Samar provinces.

The truck driver was arrested, while charges were being prepared against him.