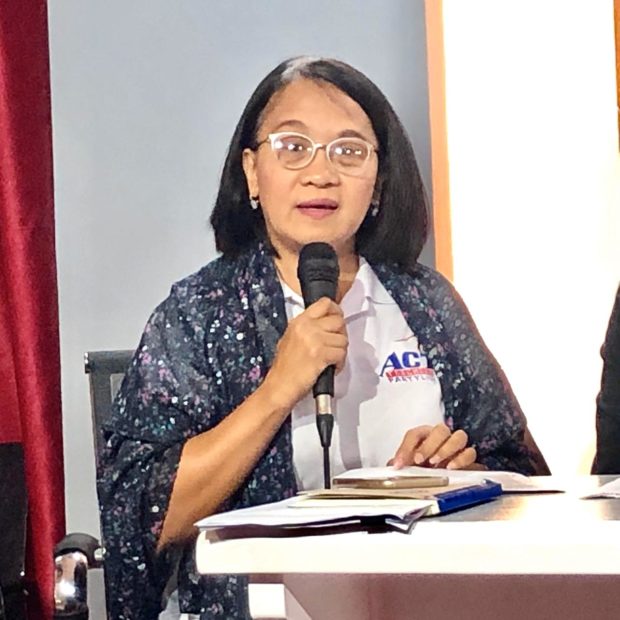 MANILA, Philippines — A Makabayan lawmaker on Monday asserted that the proposed 2023 national budget clearly displays the misplaced priorities of the administration of President Ferdinand Marcos Jr.

Alliance of Concerned Teachers (ACT) Rep. France Castro said that even though the education sector was supposed to get P852.8 billion in 2023, the biggest budget pie since it grew from P788.5 billion in 2022, the Executive Branch slashed funding for the University of the Philippines (UP) system, showing how little care it has for health and education.

“[…] With the newly submitted budget proposal already slashing P2.5 billion from the proposed budget for the University of the Philippines (UP) system and decreasing by P893 million the UP-PGH proposed budget by the [DBM] shows that the Marcos Jr. administration does not prioritize education, especially one that hones critical and analytical thinking,” Castro said in a statement.

“The new administration also does not prioritize the health of the nation even if we are still in the midst of the COVID pandemic,” she added, further raising this question: “UP-PGH is at the front lines of this battle against this virus and instead of increasing its budget it was reduced, how tragically ironic can you get?”

Castro also claimed that the overall budget for the education sector in 2023 should have been at least P1.3 trillion and not P852.8 billion as indicated in the proposed spending plan for next year.

“The Education sector will only receive P852.8 billion covering DepEd, SUCs, CHED, and TESDA way below the United Nations suggested 6% of the Gross National Product (GDP) allocation for education even if we use 2021 figures. The supposed budget for education should be at least  P1.3 trillion and not the measly P853 billion,” she pointed out.

But the Department of Budget and Management (DBM) disputed Castro’s assertions, saying it is wrong to compare the proposed 2023 budget with the already-approved 2022 General Appropriations Act (GAA).

“This is wrong, in a way, because they are comparing the 2023 National Expenditure Program (NEP) with the 2022 General Appropriations Act (GAA),” according to a statement from DBM sent to INQUIRER.net.

The DBM also explained that it only appears there is a decrease in the UP system’s budget under the 2023 National Expenditures Program proposal because its 2022 approved funding already included the additional allocation placed by Congress during deliberations on the 2022 GAA.

“The seeming decrease of P2.5 billion in UP’s budget in the 2023 NEP as compared to 2022 is attributable to the upward adjustments made by Congress in the 2022 GAA for various capital outlay projects for infrastructure projects and purchase of hospital equipment for the Philippine General Hospital, which are one-time or non-recurring expenditures,” the DBM said.

“Please note that the DBM takes into consideration the budget utilization rate of any government institution prior to budget allocation in the proposed NEP. Hence, in our review and evaluation of UP’s budget proposals, we considered its absorptive capacity, which is 66% as of end-202w,” it added.

The DBM likewise emphasized that the education sector still has the highest budgetary allocation in the proposed 2023 national budget.

“Rest assured that the education sector shall remain as being the highest budgetary priority of this administration as mandated by the Constitution, with an 8.2 percent increase in the proposed FY 2023 NEP, at Php852.8-Billion,” it said.

Aside from the education sector, Castro likewise lamented the inadequate allocation for the health sector in next year’s budget, saying that infrastructure projects still seemed to be a priority by the new administration. Infrastructure falls under the Department of Public Works and Highways (DPWH).

Under the proposed 2023 budget, P718.4 billion is earmarked for infrastructure – a decrease from 2022’s P786.6 billion – while the health sector was given P296.3 billion which is slightly higher than its funding of P268.4 billion this year.

“As a whole, the health sector  will only receive P296.3 billion for 2023 as per DBM but the DPWH will receive Php 718.4 billion in 2023 for its banner programs and the NTF-ELCAC budget was also increased under Assistance to Local Government  Units-Local Government Support Fund (ALGU-LGSF) as well as those hidden in other departments and budget items,” Castro said.

“But in the end it is the Filipino people who will suffer with the misprioritization of this administration so the national budget must be carefully be scrutinized and not railroaded,” she added.