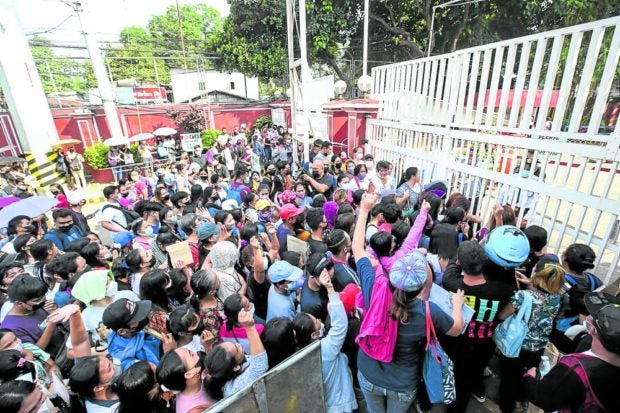 GREAT NEED | Thousands of people, both parents and students, flock to the main office of the Department of Social Welfare and Development on Saturday, many of them waiting outside the gates as early as Friday night, in the hope of getting the educational cash assistance announced by Social Welfare Secretary Erwin Tulfo before the opening of school on Monday. (Photo by LYN RILLON / Philippine Daily Inquirer)

MANILA, Philippines — The newly unveiled educational assistance program of the Department of Social Welfare and Development (DSWD) got off to a chaotic start on Saturday, prompting a public apology from the agency’s chief, as thousands of applicants swamped its main office in Quezon City and satellite offices across the country.

In Zamboanga City, authorities said at least 29 people were hurt in a stampede that broke out at a coliseum where the local DSWD unit was set up to receive potential beneficiaries.

Ranging from P1,000 for elementary students to P4,000 for college enrollees, the cash handout program was announced only two days ago by Social Welfare Secretary Erwin Tulfo.

As reports of long lines and flaring tempers came in on Saturday, Tulfo apologized to the parents, students, and guardians who endured the long and winding queues.

According to DSWD spokesperson Romel Lopez, about 5,000 people trooped to the main office alone at Barangay Batasan Hills, many of them spending the night there on Friday just to be the first in line when the office opened on Saturday morning.

Later in the day, members of Quezon City’s Task Force Disiplina had to be called to the site to enforce order as the situation became increasingly tense and chaotic, especially after many applicants grew impatient and grumbled on social media.

‘’I am sorry,’’ Tulfo, a former broadcast personality, said at an online briefing as he acknowledged the confusion and disorder.

“I apologize if you did not get your cash aid, but I didn’t say that all of you will be given the cash aid today. I said we will accommodate,” he added.

Tulfo announced that on the succeeding Saturdays, the distribution will now be led by local governments units (LGUs), but still under the DSWD’s supervision “to avoid favoritism.”

“That is the solution that we’re looking at right now,” he said.

“I don’t want to hear anything [similar to] what happened during the SAP (Social Amelioration Program) period,” Tulfo said, referring to the cash subsidy program of the Duterte administration at the height of the pandemic.

Judy Taguiwalo, who served as social welfare Secretary during the early part of the Duterte presidency, said it was “obvious that the DSWD’s front-liners were not aware of the secretary’s plan beforehand, so they have been overwhelmed by this.”

“Given the economic crisis and the increase in the number of poor families,’’ she said, Tulfo’s announcement just last Thursday regarding the cash aid program “expectedly led to the deluge of people wanting to avail [themselves] of aid.”

The newly appointed DSWD officials, Taguiwalo said, “need to consult with career officials before they embark on any action.”

“He (Tulfo) should have familiarized himself with the system of AICS (assistance to individuals in crisis situations) which has been in place for years,” she added, referring to the DSWD program providing not only educational but also transportation, food, medical and burial assistance.

Taguiwalo said the guidelines on the selection of AICS beneficiaries and aid distribution were already set in a department memorandum issued in 2014.For instance, to facilitate the process, the DSWD offices should be open on weekdays from 8 a.m. to 5 p.m. with no lunch breaks. Among the documents that should be presented by the applicants are student IDs, an enrollment assessment form or certificate of enrollment, “proof of indigence” from the barangay government and a referral letter from a qualified organization serving the poor, she said.

‘They still don’t get it’

But Tulfo said he had already posted all the important information for the applicants “on my Erwin Tulfo Facebook page … but they still don’t get it.”

“Hindi ko alam kung saan kami nagkulang [I don’t know where we came up short], but we gave everything, all the information,” he added.

Tulfo said the DSWD could only accommodate up to 2,000 among those who showed up at the main office, that’s why the others were just given stubs and told to wait for a call from the department. He also surmised that the surge in applicants may be due to the removal of proof of indigence as a requirement.

The disbursement period for the cash aid will be up to Sept. 24, Tulfo said.

Reacting to Tulfo’s decision to involve LGUs, Muntinlupa Mayor Ruffy Biazon, in a post on Twitter, said that “If they are going to tap the LGUs to assist them in distribution, we would appreciate a sit-down meeting to plan the distribution, which should be preceded by a thorough communication plan.”

“[The government] should look for an additional P2 billion for the program and increase the student aid to P10,000 per student. Because the P4,000 for college students is not enough to pay for their back-to-school requirements,” Gabriela Rep. Arlene Brosas said in a statement on Saturday.

For Kabataan Rep. Raoul Danniel Manuel, the DSWD-AICS program as currently being run “ignores the truth that almost all students need aid, especially after the national government neglected students’ needs when it imposed distance learning on the whole education community.”

“The long lines (on Saturday) indicate the need for greater financial support for the education of the Filipino youth,” he added.

29 injured in stampede over DSWD cash aid payout in Zamboanga