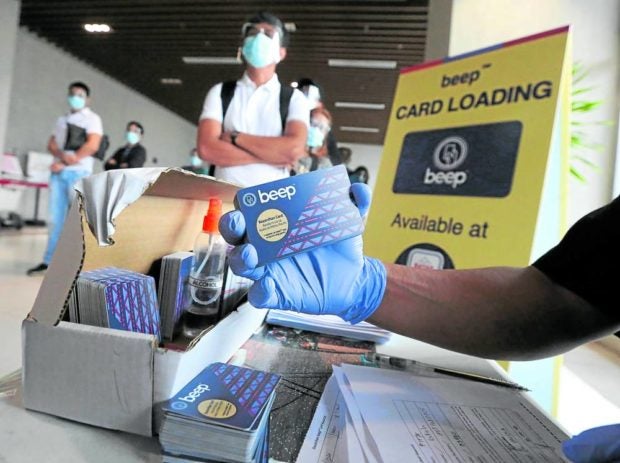 RUNNING OUT Commuters line up to get Beep cards. —INQUIRER FILE PHOTO

The Department of Transportation (DOTr) on Friday flagged the expected shortage of Beep cards because of the ongoing global shortage of computer chips used in the stored value cards used in the train lines in Metro Manila.

In a statement, the DOTr said they were addressing the looming Beep card shortage by “finding alternative ways to solve the expected demand of Beep cards when the rail transit system becomes fully normalized.”

Cesar Chavez, undersecretary for Railways of the DOTr, said that Beep card provider AF Payments Inc. (AFPI) could not “fulfill the delivery of 75,000 SVCs (stored value cards) vis-a-vis the card forecast demand of MRT (Metro Rail Transit Line) 3 for the month of July 2022 despite its repeated and diligent coordination with card suppliers abroad.”

This stemmed from the computer chip shortage, which has been affecting several industries since last year.

Chavez explained that pandemic-induced disruptions in chip manufacturing hubs and the rising shipment and logistics costs were among the reasons behind this.

The DOTr also directed all public transport operators of railways to “make necessary adjustments in controlling the sale of SVCs in order to avoid untoward incidents and to allay fears of rail commuters.”

The DOTr also advised commuters to hold on to their SVCs given the expected surge in passengers with the return of in-person classes next week, which would translate to more demand for Beep cards.

About 27.56 million students and 876,000 teachers are expected to go back to school with the resumption of in-person classes on August 22, according to the Department of Education.

Last month, Chavez said that commuters might be able to use their credit or debit cards to pay for fare across different transportation systems in two years under a unified fare collection system.

He said recently that a P4.5-billion unified fare collection system project was on its “final stage” of evaluation.

The project is seen to ease the travel of the commuting public as it is envisioned to allow any debit or credit card for payment when riding jeepneys, buses and trains, among others.

The DOTr assured the public that the expected shortage of Beep cards would not result in manual payment of fares.

“The shortage will trigger the use of these cards in a more efficient manner, while it will also prompt card holders to take care of their cards,” the agency told the Inquirer.

Those who do not have Beep cards can also still avail of the single-journey tickets, it added.

According to AFPI, about 8 million Beep cards are in circulation.