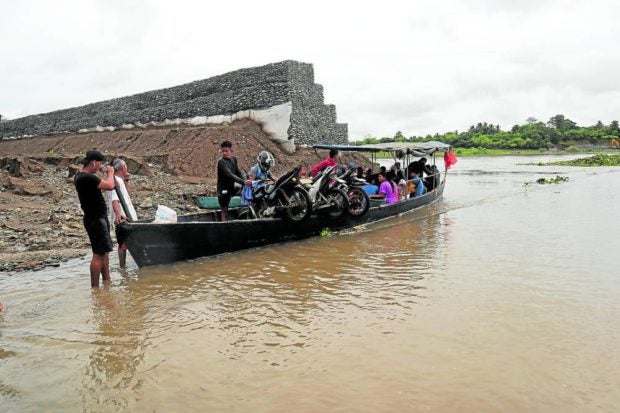 RAMON, ISABELA — Days of torrential rains prompted the management of Magat Dam in Isabela province to open five of its spillways on Wednesday to release water as the inflow from the watershed continued to rise.

Magat Dam initially released 200 cubic meters of water per second at 2 p.m. that day to ease the pressure on the reservoir after its elevation rose to 188.73 meters above sea level (masl), which was nearing the 190-masl spilling mark.

According to the National Irrigation Administration-Magat River Integrated Irrigation System (NIA-MARIIS), the discharge was equivalent to the volume of water flowing into the watershed but may change depending on the amount of rainfall in the area.

The dam, one of the country’s biggest, is part of the Magat River Multipurpose Project to increase rice production in the Cagayan River basin and to power the hydroelectric plant operated by SN Aboitiz Power Inc. An average of 17.40 millimeters of rainfall was recorded over the dam area on Wednesday, data from the Philippine Atmospheric, Geophysical and Astronomical Services Administration (Pagasa) showed.

At 10 a.m. on Thursday, the water discharge was increased to 396 centimeters when the dam’s water elevation rose to 189.38 masl, the NIA-MARIIS said in an advisory. The spillway gate was opened at 2 meters, it added.

The state weather bureau said the southwest monsoon would continue to affect the western sections of northern and central Luzon.

The heavy rains on Wednesday caused the Cagayan, Magat and Pinacanauan Rivers to overflow their banks, inundating the bridge that linked Cabagan and Santa Maria towns, the Santo Tomas-Cabagan bridge and the Alicaocao bridge in Cauayan City, all in Isabela.

These spans have not been passable to vehicles as of Thursday, officials said.

Residents living near the area were cautioned against crossing the rivers or grazing their animals around the dam as the water level may continue to rise due to the heavy downpour caused by the southwest monsoon.

In an interview, the NIA-MARIIS division manager Carlo Ablan said the water discharge is part of the dam’s protocols to ensure the reservoirs’ safe level.

But he clarified that the dam’s excess water did not cause the widespread flooding that affected 5,000 families in the towns of San Manuel and Aurora on August 13.

The floods were due to the continuous heavy rains and clogged canals at that time, submerging roads and low-lying villages, Ablan said. —VILLAMOR VISAYA JR.