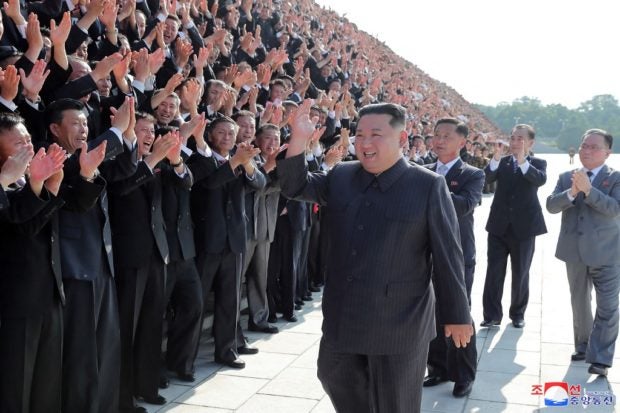 This picture taken on August 10, 2022 and released from North Korea’s official Korean Central News Agency (KCNA) on August 11, 2022 shows North Korean leader Kim Jong Un taking part in a a photo session with the participants in the national meeting for reviewing the emergency anti-epidemic work, in Pyongyang. (Photo by KCNA VIA KNS / AFP)

“The US and South Korean military authorities are analyzing detailed specifications such as flight distance.”

North Korea has not tested a cruise missile — which are not banned under United Nations sanctions on the country — since January, the Yonhap News Agency reported.

The last time Pyongyang conducted a weapons test was July 10, when they fired what appeared to be multiple rocket launchers.

North Korea has conducted a blitz of sanctions-busting tests since January, including firing an intercontinental ballistic missile at full range for the first time since 2017.

Washington and Seoul officials have also warned that the isolated regime is preparing to carry out what would be its seventh nuclear test.

Earlier this week, South Korean and American military troops kicked off preliminary drills ahead of the start of their annual combined Ulchi Freedom Shield (UFS) exercise.

The drills infuriate Pyongyang, which views them as a rehearsal for invasion.