23,000 cops to be deployed nationwide for school reopening | Inquirer News

23,000 cops to be deployed nationwide for school reopening 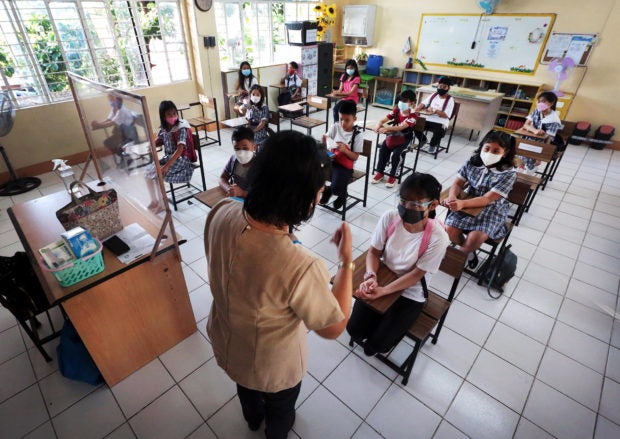 FILE PHOTO Students and teachers at the General Roxas Elementary School in Quezon City conduct a dry run of face-to-face class in this photo taken on February 8, 2022, to familiarize the students with the new rules in the conduct of classroom learning in the time of the pandemic.
INQUIRER / GRIG C. MONTEGRANDE

MANILA, Philippines — The Philippine National Police (PNP) will deploy around 23,000 personnel nationwide for the resumption of in-person or face-to-face classes in schools nationwide starting next week.

(We’ll be deploying more or less 23,000 plus PNP personnel nationwide, particularly on the premises of schools and established police assistance desks.)

(Students and parents with security concerns can quickly seek the help of our police force.)

Fajardo said that as early as July, they have coordinated with school administrators and government agencies.

Aside from schools, Fajardo said crowd build-up is also expected in transport hubs and terminals as some schools implement a complete face-to-face set-up.

The Department of Education earlier announced that classes for the school year 2022-2023 would resume on August 22.

Vice President and Education Secretary Sara Duterte said that while schools are transitioning to full in-person classes, they can implement combined face-to-face classes and distance learning from August until October 31.

By November 2, however, public and private schools all over the country must transition to five days of in-person classes.

RELATED STORIES:
DepEd orders all schools to shift to face-to-face classes by November 2