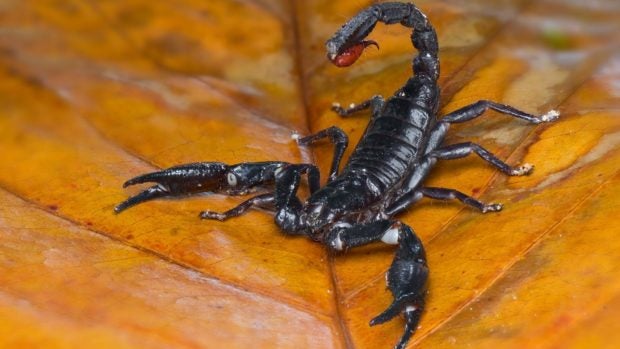 Using a pair of tweezers and tongs, lab employees remove the scorpions from the boxes and wait as they squeeze a tiny drop of venom from their needles into a receptacle. The venom is then frozen and turned into powder before it is sold.

Orenler’s farm, which opened in 2020, now has around 20,000 scorpions of the Androctonus Turkiyensis species, which was identified as a distinct type in an article published in a scorpiology journal in 2021.

“We both breed the scorpions themselves and also milk them,” Orenler said. “We freeze the venom that we obtain as a result of the milking we do, then we turn it into powder and sell them to Europe.”

The venom, which is exported to France, the United Kingdom, Germany and Switzerland, is used to produce cosmetics, painkillers and antibiotics, Orenler said, adding that one liter of the venom is worth $10 million.

Passenger stung by scorpion on airplane during flight

Read Next
US first lady Jill Biden tests positive for COVID-19
EDITORS' PICK
Metro Manila now at moderate risk for COVID-19 — DOH
Pagasa: Storm Luis to exit PAR by Thursday
Peeking inside the superb night camera features of the vivo V25 series
House energy committee chair Arroyo bats for cheap electricity
POGOs not linked to Illegal online gaming, says Pagcor
Do all the things you do, faster
MOST READ
Remulla lambasts ICC chief prosecutor
Jean Garcia’s son Kotaro catches social media attention for being a V look-alike
Gov’t presses start to roll for 92 million ballots
Maxene Magalona on being asked why she has no kids: ‘It’s awkward, invasive, a bit rude’
Don't miss out on the latest news and information.