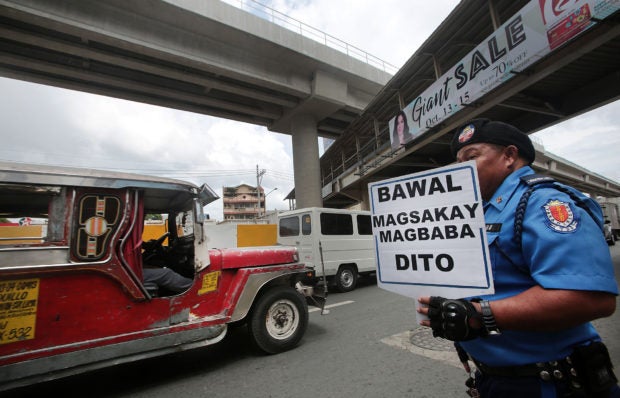 An MMDA traffic enforcer on the job in Marikina. This photo was taken on Oct. 18, 2017. (File photo by GRIG C. MONTEGRANDE / Philippine Daily Inquirer)

Under House Resolution No. 237 that Rillo filed, the probe will be conducted by the committees on local government, Metro Manila development, and transportation.

The NCAP policy — implemented in Parañaque, Manila, Quezon City, San Juan, and Valenzuela. Under that policy, motorists are fined for violations based on traffic monitoring through closed circuit television cameras.

“Drivers, motorists, public utilities and/or private vehicles in Metro Manila are currently bound to paying alleged multiple and/ or excessive fines and heavy penalties; and inefficiencies and defects, in both the policies and means and/ or grounds for violation of traffic laws, rules, and regulations, as well as the delivery of notices of these violations,” Rillo said in the resolution.

He said that. the local governments concerned and the Metropolitan Manila Development Authority (MMDA) must figure out a way to address these issues.

In the meantime, Rillo said the NCAP policy should be suspended.

“There is a need to suspend the operation and implementation of all NCAP technologies and policies of the MMDA and LGUs, until the resolution of this investigation in aid of legislation, to prevent further wronging the motorists and the commuting public,” he said.

Last Aug. 10, Surigao del Norte Second District Rep. Robert Ace Barbers delivered a privilege speech questioning the constitutionality of the NCAP. He noted that the fines imposed were excessive, a violation of Section 19, Article 3 of the Constitution.

Barbers also pointed out on the possibility that traffic violators could be penalized under two systems, as some LGUs have their own version of the NCAP that differs from the one used by MMDA.

He also stressed that no law had been passed barring people from registering their vehicles due to unpaid fines for traffic violations.

Additionally, he believes the NCAP system violates the due process provisions of the Constitution because the seven-day deadline for an alleged traffic violator’s response or contest is short.

Barbers also called for the investigation and suspension of the program.

The NCAP has been a hot topic among motorists, especially those in different social media discussion threads.

They related cases where letters were sent to people who did not own the vehicle in question, or those who were not even in the area on the date of the supposed violation.

There were also instances when the traffic violations motorists were cited for were dubious — like in the case of a motorist apprehended for using the bike lane. Several Facebook pages claimed that the motorist was only making a right turn — and would therefore need to go through the bike lane to turn right.

There are also claims that traffic lights are now changing faster or without warning, trapping motorists into violations.

The issues have led the Land Transportation Office (LTO) to seek the suspension of NCAP until a thorough study is conducted.