China goes all out to address drought | Inquirer News

China goes all out to address drought 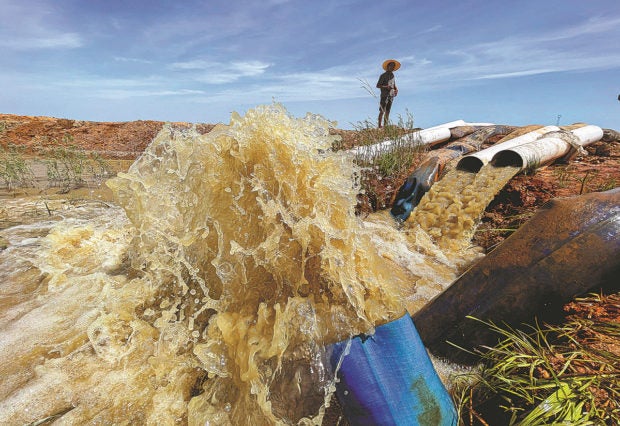 Water gushes through an irrigation system in a rice paddy in Jiujiang, Jiangxi province. Throughout the country, people are mitigating the drought’s impact on agriculture amid excessively high temperatures. [Xinhua via China Daily/Asia News Network]

Heat waves have scorched most parts of southern China since last month, resulting in a lengthy drought in hills with rice paddies that are purely irrigated by rain, according to the Ministry of Agriculture and Rural Affairs.

Given the dry period forecast for the next two weeks by the China Meteorological Administration, the ministry sent 10 expert teams and 12 support groups of technicians to major grain-producing provinces. It also released an urgent circular on Saturday to guide the work of reversing drought damage and averting grain loss.

The current heading and flowering of rice in southern China is a crucial time for total production, as crops are sensitive to temperature and moisture changes. The high temperatures and drought will affect the rate at which the plants mature, so experts need to make targeted plans for different areas, according to the circular.

For rice, measures such as reducing the temperature of the ear layer by regulating water, and spraying fertilizer to increase the plant’s resistance to heat, should be implemented to prevent pollen abortion, it added.

Xia Liming, an official at the agriculture and rural affairs department in Changsha, the capital of Hunan province, has led a team to fight drought in the major rice-producing areas in the country.

Using water to regulate temperature can prevent heat damage and improve the microclimate on farmland, he said.

In areas with sufficient water resources, irrigating during the day and draining at night reduces the field temperature, Xia added. In addition, regular spraying at noon via plant protection drones can increase a field’s humidity and reduce the temperature of the rice canopy, alleviating the impacts of drought and heat waves, he said.

Heat waves and drought can trigger plant diseases, so spraying pesticides with plenty of water during cooler periods is helpful for preventing and controlling pests, he added.

Local authorities are urged to strengthen monitoring and early warning of heat changes, keeping an eye on crop growth. Close monitoring of soil moisture can help experts scientifically assess the impact of heat and drought, the ministry said.

Tang Hongsheng, deputy director of the Jiangsu Provincial Meteorological Bureau, said that meteorological services for grain production should now be a major task.

The ministry also urged local authorities to deploy relief materials such as seeds and fertilizers to areas that have encountered harvest failure due to drought and guide farmers to switch to crops with a short growth cycle.

The planting areas of autumn grain have increased this year, and remote sensing data shows that the growth of corn, rice and soybean remains at the same level as last year, Fu Linghui, a spokesman for the National Bureau of Statistics, said on Monday.

“We need to pay close attention to the impact of natural disasters and plant diseases on grain production in August and September, which is a crucial period for autumn grain output,” Fu said, adding that field management and pest prevention should be enhanced to ensure a good autumn grain harvest.

As of Friday, Anhui province had carried out seedling protection and scientific field management on over 1.3 million hectares of farmland to fight drought.

The provincial department of agriculture and rural affairs recently established working groups to guide 16 cities in strengthening field management and reducing heat damage to rice and other crops.