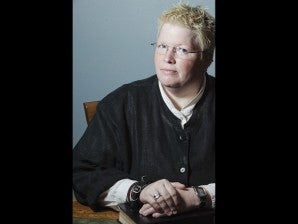 In this June 16, 2011 photo, Rev. Amy DeLong sits at her home, in Osceola, Wis. While trials of pastors who conduct same-gender ceremonies have only occurred once every several years, the threat is indeed real: DeLong faces a three-day trial starting Tuesday, June 21, 2011, on two charges: violating a church prohibition on the ordination of "self-avowed practicing homosexuals" and marrying a lesbian couple. Stacy Bengs /AP Photo

MILWAUKEE — A growing number of pastors in the United Methodist Church say they are no longer willing to obey a church rule that prohibits them from officiating at same-sex marriages, despite the potential threat of being disciplined or dismissed from the church.

In some parts of the U.S., Methodist pastors have been marrying same-sex couples or conducting blessing ceremonies for same-sex unions for years with little fanfare and no backlash from the denomination. Calls to overturn the rule have become increasingly vocal in recent weeks, ratcheting up the pressure for the Methodist church to join other mainline Protestant denominations that have become more accepting of openly gay leaders.

While trials of pastors who conduct same-gender ceremonies have only occurred once every several years, the threat is indeed real. The Rev. Amy DeLong of Osceola in western Wisconsin faces a three-day trial starting Tuesday in Kaukauna on two charges: violating a church prohibition on the ordination of “self-avowed practicing homosexuals” and marrying a lesbian couple.

The jury for the church trial will be selected from a pool of Wisconsin United Methodist clergy. A total of 13 clergy will be chosen to serve during the trial and penalty phase.

DeLong said she told her supervisors years ago that she was in a lesbian relationship and felt comforted by the support and caring she received in response.

While she avoided discussing her relationship in local church settings, she said her efforts to live halfway in the closet and halfway out took such a toll that she finally decided to break her silence. She agreed to marry a lesbian couple in the fall of 2009, and she didn’t mince words when she reported it in a required ministerial report a few months later. Eventually the two church charges were filed against her.

“I would be lying if I said this process hasn’t been difficult, but I also feel called to break the silence and tell my own truth regardless of the consequences,” said DeLong, 44. “When I entered (the ministry) I did not suspend my conscience. It’s incumbent on me not to perpetuate its unjust laws.”

The chances of getting the rule reversed within the Methodist church are far from certain, however. Rule changes must be approved by delegates at the church’s General Conference, held every four years. Because a growing number of delegates come from Africa, the Philippines and other theologically conservative regions, voting patterns reflect strong resistance to change.

That hasn’t stopped Methodist clergy in the U.S. from raising the stakes. Hundreds of pastors from areas including Illinois, Minnesota, New York and the northeastern New England states have signed statements in recent weeks asserting their willingness to defy the rule.

Those who do so could be charged with violating denominational law and forced to face a church trial. Penalties could include defrocking or suspension from the ministry.

At a conference this month in Minnesota, the Rev. Bruce Robbins of the Hennepin Avenue United Methodist Church invited clergy to sign a statement saying they’d be willing to conduct any wedding, not just heterosexual ones. He said more than 70 signed it.

Robbins said he was driven to a sense of urgency because efforts are under way to have Minnesota’s constitution limit civil marriages to heterosexual couples.

“One of the tragedies is, there are so many things we should be attending to: poverty issues, justice issues,” he said. “I wish this didn’t have to be at the center of our efforts today. But it is because of the inequality, the unfairness of the policy.”

Similar efforts in New York this month drew signatures from more than 140 clergy and another 500 signatures of support from lay people, according to an organizer. Another 100 retired clergy did the same in the New England states, and at least a dozen there have actually conducted same-sex marriages with no complaints.

Organizers in northern Illinois gathered about 200 pastor signatures on June 10 but took an extra step, as well. Because the jurors in church trials come from a pool of clergy members within the same geographical region, the northern Illinois clergy members passed a nonbinding agreement that any jury that convicts a pastor recommend a penalty no stronger than a 24-hour suspension.

“It’s not something we can dictate to the jury but it’s a suggestion of how we can both honor rules of the church law and also honor Jesus’s teaching about inclusivity,” said Ermalou Roller, a retired pastor in the Northern Illinois Conference.

Theologically conservative Methodists believe that the Bible bars same-sex relationships and have been advocating for years to keep the prohibition against same-gender marriage in the Methodist’s Book of Discipline. Just last month, the Methodist Judicial Council, the denomination’s highest court, upheld the ban on same-gender marriage and clergy who are “self-avowed practicing homosexuals.”

An executive with an advocacy group for conservative mainline Protestants said he didn’t expect the provision would be changed anytime soon. Mark Tooley, the president of The Institute on Religion and Democracy, said it would either have to be overturned by a vote of the whole worldwide delegation, or the delegation would have to allow the U.S. delegation to set rules specifically for itself. Neither option has historically gained much traction, he said.

Although DeLong’s case has been drawing widespread attention, it’s not the only reason that momentum has been building to overturn the prohibition. A number of Methodist clergy say it violates the church’s social-justice teachings, and they say they’re stepping up their efforts in part because national attitudes toward discrimination against gays and lesbians are becoming more enlightened. Same-sex marriage is now legal in Connecticut, Iowa, Massachusetts, New Hampshire, Vermont and Washington, D.C.

One retired pastor in Massachusetts has been defying the same-sex-wedding ban for more than 10 years without drawing any complaints and has no plans to stop. The Rev. Richard Harding, 85, said the church is only hurting itself by driving away both talented clergy and younger members who think the policy is out of touch.

“I’m getting on in years and I may not see the change but there’s definitely an uprising taking place,” he said. “There are signs that the pole of justice is beginning to lean the proper way. I think we’ll see even more of this. We aren’t going to go away.”