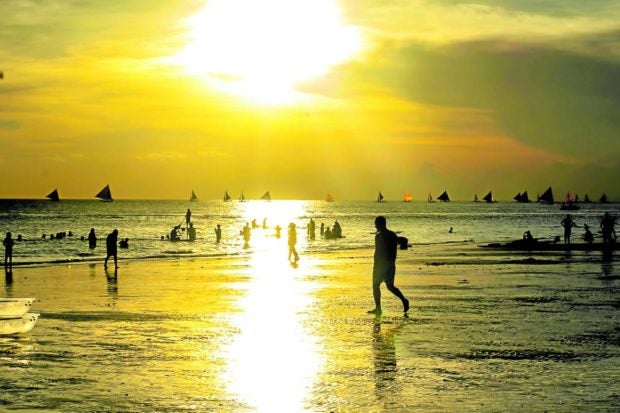 SUNSET DREAM | Tourists continue to flock to the world-renowned Boracay Island in this photo taken in early August 2022. The number of leisure travelers lured into the island known for its powdery white sand, pristine beaches, and dreamy sunsets jumped by over 200 percent in July based on local tourism office records. (Photo by IAN PAUL CORDERO)

ILOILO CITY, Iloilo, Philippines — The number of foreign tourists and overseas Filipinos who visited Boracay Island has increased last month, according to the data released by the Municipal Tourism Office of Malay town in Aklan province, which has jurisdiction over the resort island.

For the whole month of July, 16,730 foreign tourists arrived in Boracay, or 246 percent higher than the 6,873 arrivals in June.

The monthlong figure of foreign arrivals was almost equivalent to the total number of foreigners who visited the island in five months this year (February to June), which stood at 18,845.

Visiting overseas Filipinos, including those residing and working overseas, reached 6,107 in July, higher than the 4,269 recorded in June.

But domestic tourists remained to make up the bulk of arrivals on the island with 160,259 recorded in July. This was, however, lower than the 182,508 recorded in June.

There have been a total of 183,096 tourists in July, with an average of 5,906 tourists per day. The figures were well within the Department of Environment and Natural Resources’ recommended average of 6,405 arrivals a day for the island to stay within its carrying capacity.

The rise in the number of tourists may be attributed to the easing of COVID-19 restrictions across the country which allowed greater mobility.

Another Korean carrier, Jin Air, is also set to fly to Kalibo soon and is expected to further increase the arrival of Korean tourists.