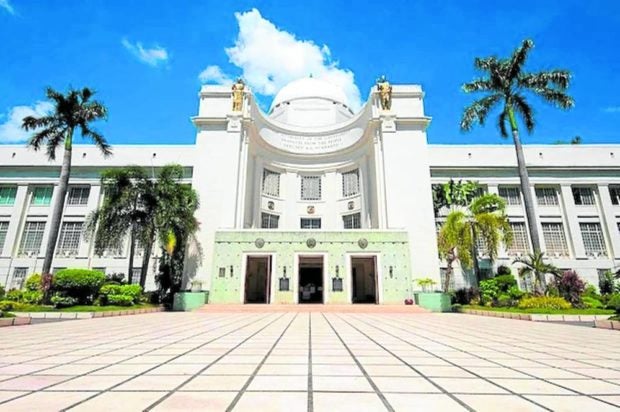 LANDMARK The Cebu provincial capitol, a landmark in Cebu City, will continue to be maintained as a tourism facility even if a new building is constructed in Balamban town. —CEBU PROVINCIAL GOVERNMENT FACEBOOK PHOTO

CEBU CITY—The seat of power of the Cebu provincial government will leave this city as plans to transfer it in the industrial town of Balamban were now taking shape, nearly three decades since the move was first considered.

The construction of the government center in Balamban, located in the western coast of the island, will start within the year, according to Gov. Gwendolyn Garcia.

“The design of the government center or the executive offices will be a replica of [the] capitol [in Cebu City],” she told reporters here last week.

The Capitol, a neoclassical edifice built in 1936 and completed in 1938, was constructed at a time when Cebu City was both its economic and political capital. The city, however, ceased to be part of the province nearly half a century ago.

Founded as a Spanish colony in 1565, Cebu became the provincial capital city on Feb. 24, 1937. It was declared a highly urbanized city on Dec. 22, 1979, making its political governance independent from the province.

According to Garcia, the national government has already allocated P200 million in the General Appropriations Act of 2022 to help the province transfer its government center to Balamban, located 52 kilometers from Cebu City.

Garcia said she has met with officials of the Department of Public Works and Highways (DPWH) on Aug. 3 to discuss the construction of the new provincial government center in Balamban.

“We are moving forward. We need to start already lest the amount of P200 million be set aside. That is why DPWH is anxious to start,” she said.

Garcia said the provincial government also allotted at least P500 million for the new government center in Balamban, which would be set up in at least 50 hectares of lands and would include a housing complex for its workers and some national government offices.

The idea for the Capitol to relocate to Balamban was first considered when the late Emilio Osmeña was governor (1988-1992). It was for this reason that Osmeña initiated the construction of the 33-km Cebu Transcentral Highway that cut through the island’s highlands to link Balamban to Cebu City.

A fast growing industrial municipality, Balamban is known for its multimillion-dollar shipping industry that builds world-class yachts and catamarans that cater to the international market.

Garcia affirmed that Osmeña envisioned a project of a similar nature.

She said Balamban was the ideal location as its would make services accessible to residents in the southern and northern corridors of Cebu province. Also, local officials and residents would no longer have to suffer from the heavy traffic in going to the city to transact business at the Cebu provincial capitol once the government center is moved to the town, she added.

Read Next
16 rescued as cargo vessel capsizes off Masbate
EDITORS' PICK
Metro Manila now at moderate risk for COVID-19 — DOH
Pagasa: Storm Luis to exit PAR by Thursday
Peeking inside the superb night camera features of the vivo V25 series
House energy committee chair Arroyo bats for cheap electricity
POGOs not linked to Illegal online gaming, says Pagcor
Do all the things you do, faster
MOST READ
Remulla lambasts ICC chief prosecutor
Jean Garcia’s son Kotaro catches social media attention for being a V look-alike
Gov’t presses start to roll for 92 million ballots
Maxene Magalona on being asked why she has no kids: ‘It’s awkward, invasive, a bit rude’
Don't miss out on the latest news and information.