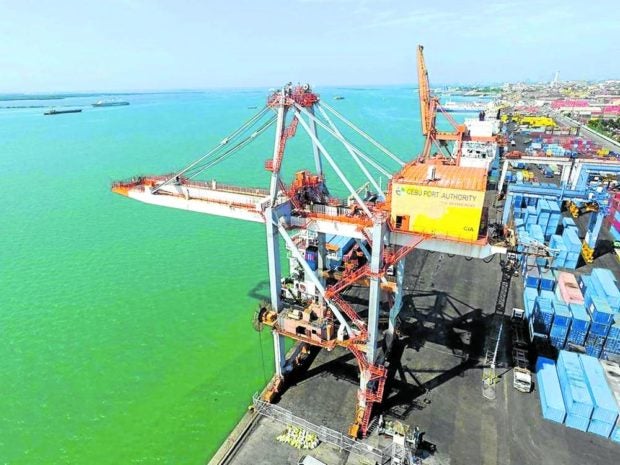 UNDER SCRUTINY | The Philippine Ports Authority, which manages port operations in the country, is under fire from shipping firms for its contracts with private entities that resulted in “excessive” port fees. —(Photo from the Cebu Ports Authority)

CEBU CITY, Cebu, Philippines —The biggest group of shipping operators in the country has asked the Department of Transportation (DOTr) to review the administrative orders issued by the Philippine Ports Authority (PPA) that have led to an increase in port charges by as much as 2,000 percent.

Edgardo Nicolas, the administrator of the Philippine Coastwise Shipping Association (PCSA), said the recent policies of the PPA to contact to certain private groups the trash collection and the management of ports without consulting the shipping operators have led to increases in sea transport costs.

“We would like to emphasize that our operating costs and the increase in passage and freight rates in shipping is certainly not just brought about by the tremendous increase in fuel prices but also by the implementation of recent policies by the PPA that greatly contributed and will continue to increase the cost of domestic logistics cost and eventually impact the country’s inflation to the detriment of the public,” he said in an Aug. 9 letter to Transportation Secretary Jaime Bautista.

PCSA, the largest shipping association in the Philippines with about 50 members, said the PPA promulgated and implemented Administrative Order No. 08-2021 that imposed an excessive increase in garbage collection fees to be collected by private contractors without undergoing public hearings with shipping companies and other stakeholders.

Moreover, it allowed the contractors to collect garbage fees at every port of call of the shipping companies even if they would not use the facilities of these contractors, PCSA said.

“It is thus respectfully requested that this PPA policy be immediately suspended as this certainly adds to the operating cost that is eventually passed on to the riding public and consumers,” Nicolas said.

PCSA also requested the DOTr to immediately stop the awarding of port terminal management contracts to private entities that have resulted in the “exorbitant and unconscionable” increases in port charges by these entities by as much as 500 percent to 2,000 percent in key ports in the country, such as those in the cities Ozamiz, Ormoc, Zamboanga, Tagbilaran, Surigao, Tacloban, Legazpi and Calapan; and the towns of Nasipit and Matnog.

Nicolas told Bautista that the “unbridled collection of port charges by these private entities could weigh on the prices of goods more than the higher fuel rates that we are currently experiencing.”

“If left unchecked, these could even spike up inflationary rates on logistics more than the shipping fare hikes due to fuel adjustment,” he added.

The group was also concerned about the PPA’s Administrative Order No. 12-2019, which prescribes the Centralized Ticketing System (CTS) that allegedly did not go through the required public hearing and was implemented without considering that most shipping companies have already established their own online ticketing system.

PCSA noted that the PPA entered into an almost P500-million contract with a private contractor for the CTS without informing the shipping companies.

“Needless to say, this policy will not really add value to shipping operations but instead will create further costs to the shipping rates that will be absorbed by the public,” he said.

Nicolas said his group was seeking the immediate suspension of these PPA administrative orders while these policies were being reviewed.