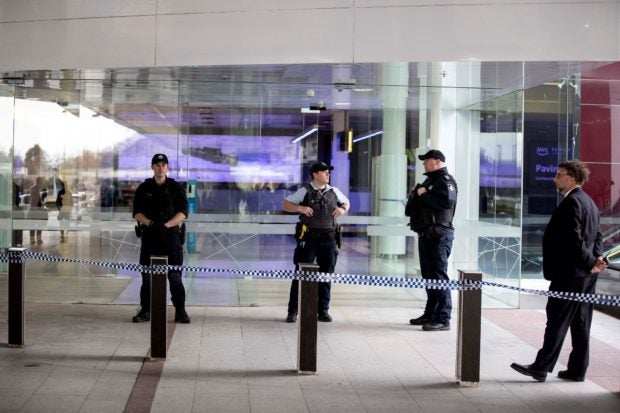 Police stand guard at the entrance of a terminal after a gunman opened fire at the airport in Canberra on August 14, 2022. AFP

SYDNEY — A gunman fired around five shots inside Canberra’s main airport Sunday, sending passengers fleeing but injuring no one before he was detained by Australian police.

Images posted on social media showed a police officer restraining a man on the ground inside the terminal as the emergency alarm sounded in the capital’s main airport.

Police said the man was taken into custody and was being held at a station in the city. A firearm was recovered, they added.

The gunman entered the airport’s departures area in the early afternoon and sat close to the terminal’s large glass windows, detective acting superintendent Dave Craft told reporters outside the building.

The airport was evacuated and locked down, leading to the suspension of flights

But normal operations resumed after the airport was re-opened later in the day, though some flights had been canceled.

Craft said the crime scene indicated that the man had fired shots at the glass windows in the terminal.

No shots were directed at passengers or staff, he said. 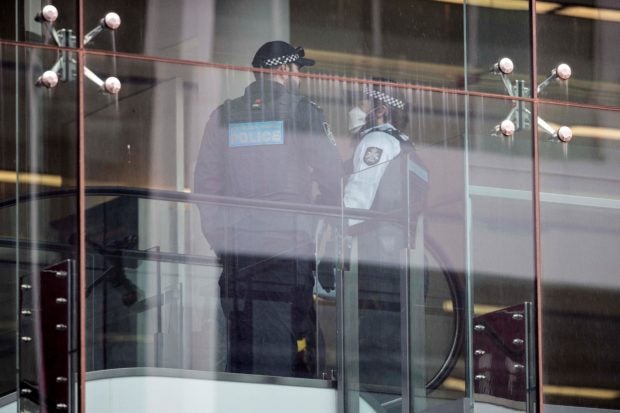 Police stand guard inside a terminal after a gunman opened fire at the airport in Canberra on August 14, 2022. AFP

Several apparent bullet impacts were visible on the glass front on the second floor of the airport, television images showed.

A woman identified only as Helen was quoted as telling The Guardian newspaper that she saw a man “shooting into the air” not far from the check-in counter, describing him as being middle-aged and “clean cut”.

After examining the airport’s closed-circuit television images, police said they believed the man had acted alone.

The situation was now “contained”, police said, describing the airport as an “active crime scene”.

The motive behind the shooting was not immediately clear, police said.

A journalist with Australian public broadcaster ABC, Lily Thomson, reported that she heard the shots before people started to scream.

She saw a fearful woman looking after a baby.

“So we all ran and I stayed with that grandma and her baby and hid behind an information desk,” Thomson reported on ABC.

“We stayed there for a couple of minutes until security told us to evacuate out to the car park,” she added. 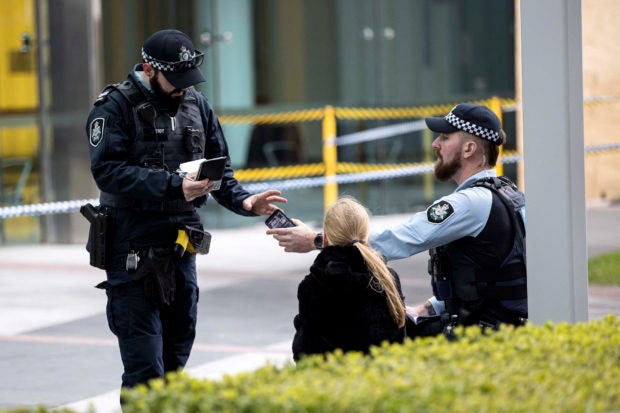 Police speak with a witness after a gunman opened fire at the airport in Canberra on August 14, 2022. AFP

“Everyone was hiding behind chairs and people were running.”

Another passenger who gave only her first name, Alison, told the Sydney Morning Herald and Melbourne Age newspapers that she saw the gunman.

“We were in security and heard the first gunshots. I turned around and there was a man standing with a pistol, like a small one, facing out towards the car drop-off,” she said.

“Someone yelled get down, get down and we just ran out of there.”

Prime Minister Anthony Albanese said he had been briefed on the shooting incident.

“I am advised a man has been detained and there is no ongoing threat present,” the prime minister said in a statement.

For terror attack ‘joke’ on TikTok, 19-year-old gets banned from airlines