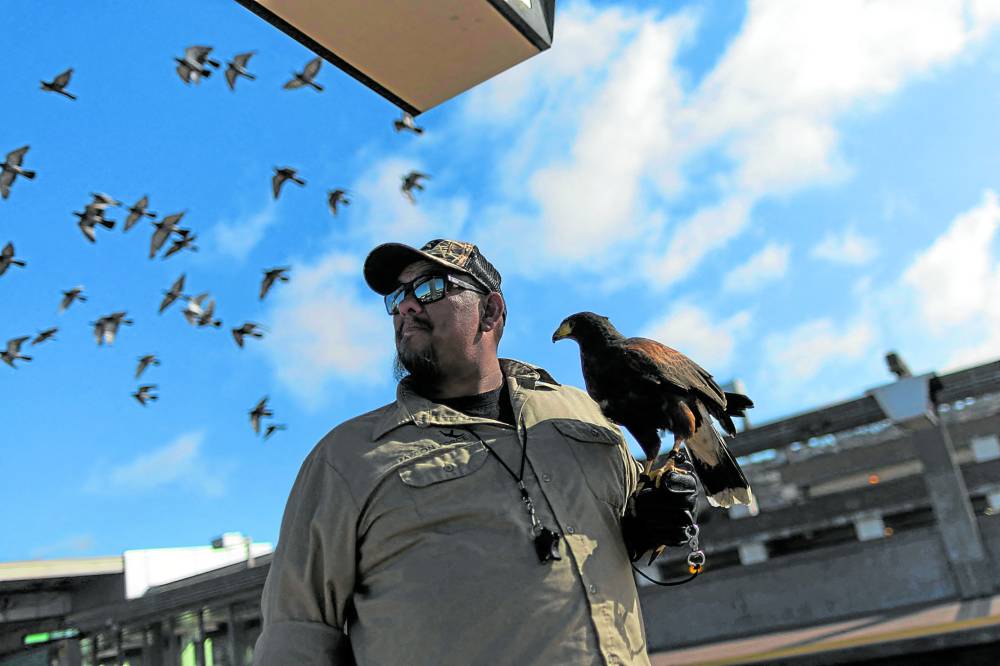 DO YOUR ‘BUSINESS’ ELSEWHERE Ricky Ortiz walks around with Pac-Man, a 5-year-old Harris’s hawk as they chase pigeons away from El Cerrito del Norte Metro station in El Cerrito, California, on Aug. 10. —Photo by REUTERS

A 5-year-old Harris’s hawk named Pac-Man has taken up the perch at El Cerrito del Norte station, where he’s on the lookout – not for fare evaders, but pigeons.

Ricky Ortiz, a falconer with Falcon Force and Pac-Man’s handler, began patrolling with the bird at the station this summer, contracting with the Bay Area Rapid Transit system, or BART, to keep the pigeons at bay and protect commuters from pigeon poop.

The team patrols three days a week, starting their day at the bottom level entrance before scoping out the platforms, scaring away any pigeons who are resting on a ledge or on the interior scaffolding of the station.

So far Ortiz has noticed a big difference.

“There was probably less than half of the pigeons here after the week of us flying,” he said.

Ortiz tries to keep Pac-Man from feasting on the pigeons or local rodents, instead giving him snacks throughout the day to keep his feathery friend happy on the job.

So far, Pac-Man has been a hit with commuters.

Rider Bethany Campbell, 43, took a selfie with Ortiz and Pac-Man to send to her family.

“We have family back in the Midwest and the south and they think everything in the Bay Area is weird, so the idea of having birds here for bird eradication is just funny to them,” Campbell said, adding that she was first scared when she saw the hawk but now thinks it’s great.

“I switched cars because I wasn’t going to be trapped in a metal box with a bird of prey.”