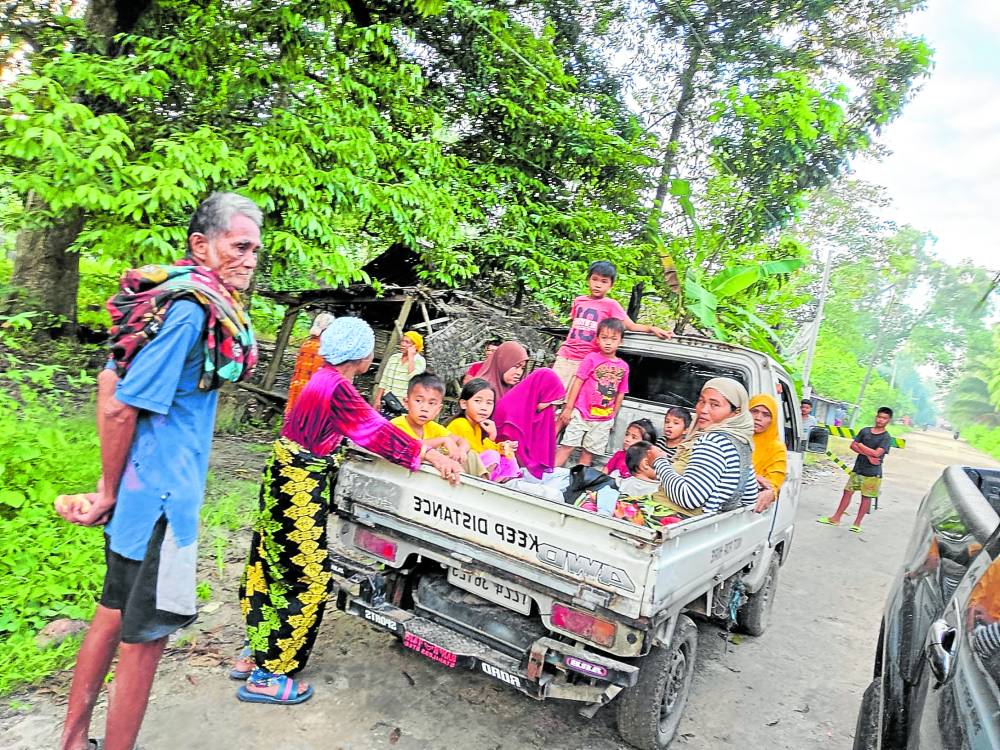 ON TO SAFETY Residents of Barangay Macabual in Pikit, Cotabato, prepare to leave their village on Friday, August 12, 2022, to avoid being caught in the crossfire between feuding members of the Moro Islamic Liberation Front. —PHOTO FROM BALITANG MINDANAO

Quinunez died instantly from multiple gunshot wounds, his remains retrieved around 10 a.m. on Thursday, according to Peralta.

Reynaldo Mercado, a member of the Barangay Peacekeeping Action Team was hit by a stray bullet while he was sweeping outside a detachment within the boundary of Ladtingan and Macabual. He was immediately rushed to a hospotal in Barangay Poblacion, Pikit.

Ladtingan village councilman Renald Palma said in a radio interview that some houses in nearby Gle-gli village were also hit by stray bullets during the intense gunfire on Wednesday night while a rocket-propelled grenade landed on the wooden door of one of the residents.

“There were evacuees but many stayed with their relatives in nearby communities,” Peralta said.

Macabual, a village with a population of about 4,500 based on the 2020 census, is now part of the Bangsamoro Autonomous Region in Muslim Mindanao after it voted to join the Bangsamoro region even as Pikit itself remained with Cotabato province.

Peralta said that while the village no longer belongs to Pikit, the town’s police personnel were still providing security measures to its adjacent communities to prevent spillover. He said government forces were heading to the area to put an end to the hostilities between the two factions so that the displaced civilians could return home.

“We evacuate because of floods and because of rido (clan war),” said Anok Bugasan, a resident of Macabual who fled to the town center before the firefight erupted.