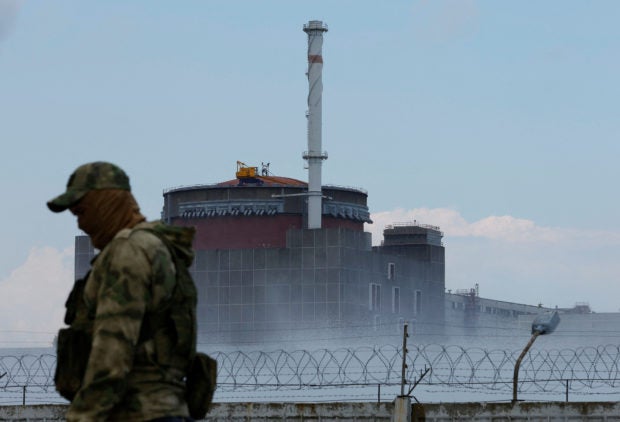 A serviceman with a Russian flag on his uniform stands guard near the Zaporizhzhia Nuclear Power Plant in the course of Ukraine-Russia conflict outside the Russian-controlled city of Enerhodar in the Zaporizhzhia region, Ukraine August 4, 2022. (REUTERS)

KYIV/NEW YORK  – Russia and Ukraine accused each other on Thursday of shelling Europe’s biggest nuclear power plant as the U.N. chief proposed a demilitarised zone at the site amid fears of a catastrophe.

The U.N. Security Council met on Thursday to discuss the situation. Secretary-General Antonio Guterres called on both sides to halt all fighting near the plant.

“The facility must not be used as part of any military operation. Instead, urgent agreement is needed at a technical level on a safe perimeter of demilitarisation to ensure the safety of the area,” Guterres said in a statement.

Russia seized Zaporizhzhia in March after invading Ukraine on Feb. 24. The plant, near the front line in the fighting, is held by Russian troops and operated by Ukrainian workers.

At the Security Council meeting, the United States backed the call for a demilitarised zone and urged the International Atomic Energy Agency (IAEA) to visit the site.

Russia’s U.N. Ambassador Vassily Nebenzia said the world was being pushed “to the brink of nuclear catastrophe, comparable in scale with Chornobyl.” He said IAEA officials could visit the site as soon as this month.

Reuters could not independently verify the reports from either side about circumstances at the plant.

“Only a full withdrawal of the Russians … and the restoration of full Ukrainian control of the situation around the station can guarantee a resumption of nuclear security for all of Europe,” he said in a video address.

Kyiv and Moscow have previously blamed each other for attacks on the site. Ukraine has also accused Russia of firing rockets at Ukrainian towns from around the captured nuclear power plant in the knowledge it would be risky for Ukraine to return fire.

RUSSIAN BASE IN CRIMEA

Separately, satellite pictures released on Thursday showed devastation at an air base in Russian-annexed Crimea. It suggested Ukraine may have obtained new long-range strike capability with potential to change the course of the war, Western military experts said.

Images from independent satellite firm Planet Labs showed three near-identical craters where buildings at Russia’s Saki air base had been struck with apparent precision. The base, on the southwest coast of Crimea, suffered extensive fire damage with the burnt-out husks of at least eight destroyed warplanes clearly visible.

Russia has denied aircraft were damaged and said explosions at the base on Tuesday were accidental. Ukraine has not publicly claimed responsibility for the attack.

Referring to the damage, Ukrainian presidential adviser Mykhailo Podolyak told Reuters in a message: “Officially, we are not confirming or denying anything … bearing in mind that there were several epicentres of explosions at exactly the same time.”

Russia, which seized and annexed Crimea in 2014, uses the peninsula as the base for its Black Sea fleet and as the main supply route for its invasion forces occupying southern Ukraine, where Kyiv is planning a counter-offensive in coming weeks.

The Institute for the Study of War said Ukrainian officials were framing the Crimea strike as the start of Ukraine’s counter-offensive in the south, suggesting intense fighting in August and September that could decide the outcome of the next phase of the war.

Exactly how the attack was carried out remains a mystery but the near-identical impact craters and simultaneous explosions appear to indicate it was hit by a volley of weapons capable of evading Russian defences.

The base is well beyond the range of advanced rockets that Western countries acknowledge sending to Ukraine so far, though within range of more powerful versions Kyiv has sought. Ukraine also has anti-ship missiles which could theoretically be used to hit targets on land.

Meanwhile, the U.S. State Department said that Russian officials trained in Iran in recent weeks as part of an agreement on the transfer of drones between the two countries.

U.S. officials said last month that Iran was preparing to provide Russia with up to several hundred drones, including some that are weapons capable, raising concerns that Tehran was now supporting Russia in its war in Ukraine.

Russia says its “special military operation” is going to plan, to protect Russian speakers and separatists in the south and east. Ukraine and its Western allies say Moscow aims to solidify its grip on as much territory as possible.

Since the war started, tens of thousands of people have died, millions have fled and cities have been destroyed.

Ukraine reported Russian bombardment along the entire front line, from the area around Kharkiv in the northeast, across eastern Donetsk province, and on the banks of the wide Dnipro river in Zaporizhzhia, Kherson and adjacent provinces.