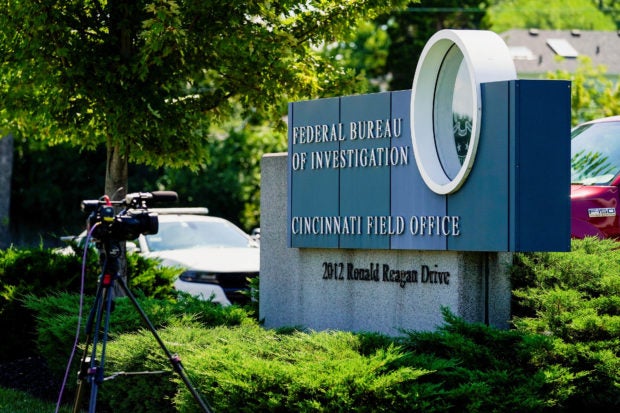 A view shows a sign outside of the FBI’s Cincinnati Field Office, after police closed off Interstate 71 North after reports of a suspect attempting to attack the FBI building, in Cincinnati, Ohio, U.S., August 11, 2022. REUTERS/Jeffrey Dean

Police were locked in a standoff on Thursday with an armed man who tried to breach the FBI building in Cincinnati, Ohio, earlier in the day before fleeing and exchanging gunfire with officers, authorities said.

The incident began at about 9:15 a.m. (1315 GMT) when the suspect unsuccessfully tried to enter the FBI’s visitor screening facility. He then fled the area in a white vehicle, heading northbound on Interstate 71, the FBI said.

About 20 minutes later, a state trooper spotted the vehicle in nearby Warren County and attempted a traffic stop. A chase ensued as the suspect fired his weapon at the state trooper, Ohio State Highway Patrol spokesman Nathan Dennis said during a news briefing.

The vehicle eventually came to a stop and gunfire was exchanged between the suspect and police officers, he said. No police were injured, Dennis said.

“The scene is still active and there is still an active standoff situation at this time,” Dennis said.

Several highways in the Cincinnati area were closed as a result.

“Law enforcement has traded shots with a male suspect who is wearing a gray shirt and body armor,” Clinton County Emergency Management Agency said earlier, urging people in the area to stay inside and lock their doors.

NBC News reported that the suspect was armed with an AR-15-style semiautomatic rifle and fired a nail gun into the FBI building.

Details and the motive were unclear.

The FBI has been the subject of online threats since its agents searched former President Donald Trump’s Florida estate this week as part of an investigation into documents removed from the White House as he was leaving office in January 2021.