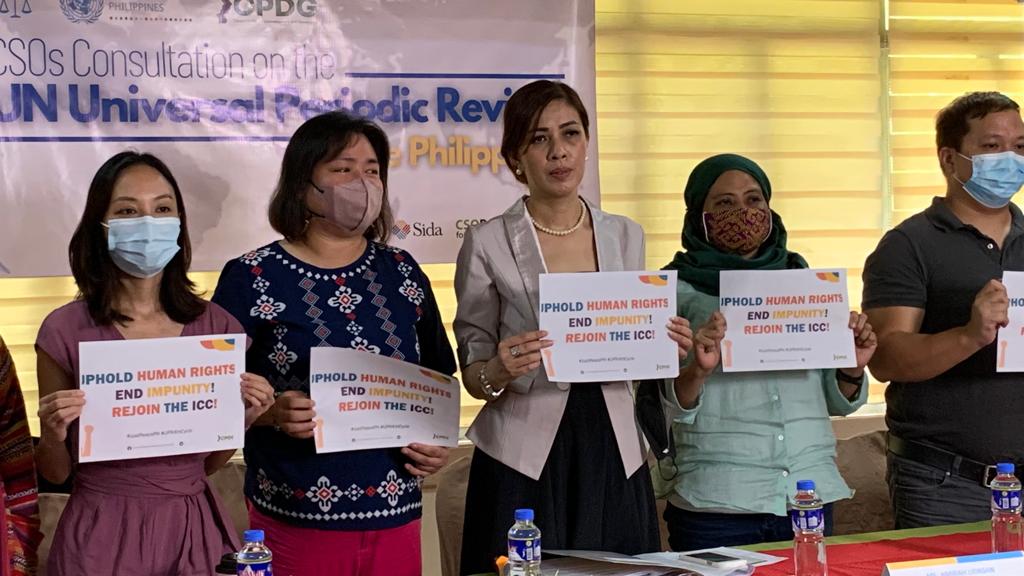 CHR Executive Director Jacqueline de Guia holds a press briefing with civil society organizations’ representatives about consultations for their report, which will be crafted ahead of the UN Universal Periodic Review of the rights situation in the Philippines. (Photo by Gabriel P. Lalu/ INQUIRER.net

The Commission on Human Rights (CHR) on Thursday urged President Ferdinand Marcos Jr. to name his nominees to fill the vacant CHR seats so it could prepare for the Universal Periodic Review (UPR) of the United Nations in November.

All five seats of the commission are vacant and the constitutional agency is run only by its executive director and spokesperson Jacqueline de Guia.

De Guia on Thursday called a press briefing to announce recommendations ahead of the UN periodic review.

Among the recommendations were allowing the International Criminal Court (ICC) to investigate the extrajudicial killings under former President Rodrigo Duterte, putting a stop to Red-tagging, and repealing laws and repressive policies that curtail civil and political rights.

In terms of socioeconomic rights, they urged Marcos to implement genuine agrarian reform and improve the indicators for monitoring needs and access to services by vulnerable and marginalized sectors, as well as to pass security of tenure and national minimum wage laws.

The government is preparing for the fourth cycle of the UPR, a state-driven process in which UN member-states state the actions they have taken to improve human rights and address violations.

In publicizing their recommendations, De Guia said they wanted to “put the government in a position where it has to talk about human rights.”

Marcos has yet to make any public statement on the country’s human rights situation except to say it would no longer rejoin the ICC, which was investigating Duterte’s bloody drug war campaign.

“Of course, the upcoming UPR is a flashback of the past five years and does not reflect the current administration,” De Guia said. “The challenge remains upon the incumbent administration to act upon those concerns [and] deliver concrete action on the ground that would illustrate action and promotion.”

At the same time, she asked Marcos to appoint “independent, credible and varied commissioners” to the CHR after its fifth batch of commissioners formally ended their seven-year term on May 5, creating a void in the agency.

Under the 1987 Constitution, the President appoints the CHR’s en banc commissioners.

“It is important particularly for the incumbent government to appoint independent, credible and varied commissioners or representatives as commissioners and chairperson,” De Guia said. “We are governed by the Paris Principles which means we want to make sure that human rights institutions like the CHR remain strong and independent.”

The agency, however, continues to function even without any commissioner, she added.

“We remain to be a strong credible institution and protection work continues,” she said. “We continue to investigate, quick dispatch operations, and we [still] have trainings and seminars that endeavor to continue the understanding of human rights.”