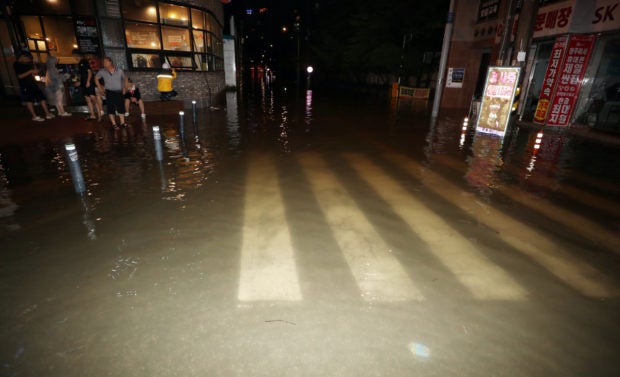 Roads in Cheongju, about 110 kilometers south of Seoul, are flooded on Wednesday, following record rainfall. | YONHAP via The Korea Herald/Asia News Network

SEOUL — Casualties from this week’s heavy rains have risen to 11 people dead and eight others missing, officials said Thursday.

Of the dead, six were in Seoul, three in Gyeonggi Province and two in Gangwon Province while three of the eight unaccounted for were from Seoul, according to data from the Central Disaster and Safety Countermeasures Headquarters.

A total of 3,775 homes and buildings were inundated, most of them in Seoul.

Over 980 people from 548 households, mostly from the wider Seoul area, have been displaced, which left them staying at local schools and gyms. A further 4,297 people from 2,042 households across the country have temporarily evacuated, officials said.

The Korea Meteorological Administration has lifted the downpour warning in the wider Seoul area and Incheon, 27 kilometers west of Seoul, but maintained a heavy rain warning for the country’s central region, including South Chungcheong Province, where precipitation may reach between 30 and 40 milimeters per hour.

Like a scene from ‘Parasite’: Floods lay bare social disparity in South Korea