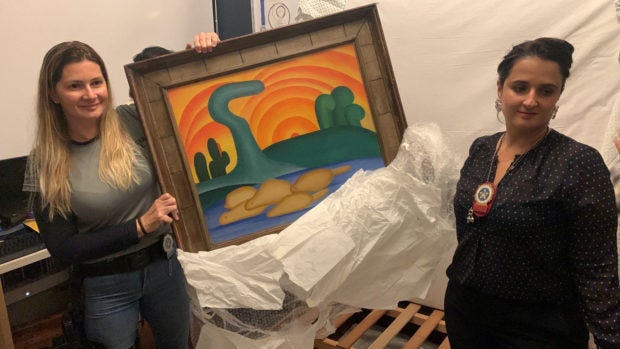 RIO DE JANEIRO — Brazilian woman Sabine Coll Boghici, 48, was arrested on Wednesday on allegations she was part of a bizarre scheme to defraud her 82-year-old mother, Genevieve Boghici, the wife of the late art collector Jean Boghici, out of money, artwork and jewelry totaling some 724 million reais ($142.42 million).

Her arrest has exposed a disturbing web of fraud that police say lasted years and involved alleged psychics to swindle artwork by some of Brazil’s most emblematic painters. Four other people were also arrested and two others, Diana Rosa Aparecida Stanesco Vuletic and Slavko Vuletic, are on the run.

The scam began in 2020 when Genevieve was approached by a supposed psychic with prophecies of her daughter’s imminent death.

The victim was then taken to several more psychics who police say used personal information provided by her daughter to scam her distraught mother into transferring money to pay for “spiritual treatment.”

In the months that followed, police allege the suspects physically threatened Genevieve and that she was kept at home for months by her daughter.

Sabine and an accomplice posing as a psychic “began to take the artwork from the (mother’s) house, claiming that the painting was cursed with something negative, with negative energy that needed to be prayed over,” said Rio de Janeiro police officer Gilberto Ribeiro.

After almost a year of being mistreated by Sabine and her accomplices, the victim decided to go to the police.

Three pieces from iconic modernist painter Tarsila do Amaral – O Sono, Sol Poente and Pont Neuf – were also stolen, which together police appraised at a value of 700 million reais ($137.69 million).

Amaral’s Sol Poente was among 11 paintings recovered Wednesday in a Rio de Janeiro police raid on one of the psychic’s homes.

Authorities have also recovered three paintings in Sao Paulo. Two were sold to a museum in Buenos Aires but have not yet been recovered.