Schools in quake-hit Cordillera to hold classes remotely, in other venues | Inquirer News

Schools in quake-hit Cordillera to hold classes remotely, in other venues 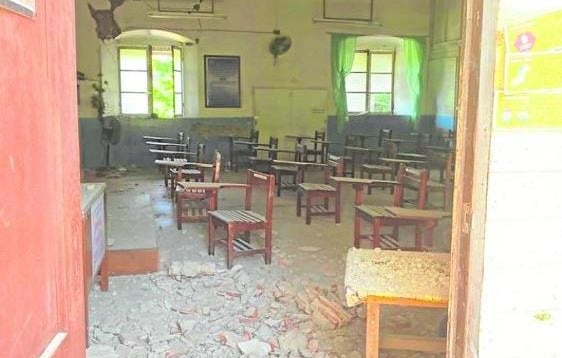 OFF-LIMITS | Holy Spirit Academy of Bangued in Bangued, Abra, is among the schools that suffered heavy damage from the July 27, 2022, earthquake. (Photo by CATHERINE BULDA-BALLESTRA / Contributor)

During Wednesday’s House of Representatives’ North Luzon Growth Quadrangle committee hearing on the readiness of schools in the earthquake-affected areas, Assistant Education Secretary Francis Cesar Bringas said preparations have taken longer in CAR as it appears to be the hardest-hit in Northern Luzon.

Bringas said coordination meetings done by the Department of Education (DepEd) with schools and stakeholders have identified which schools are ready to do in-person classes and which will use other learning modes.

“Now for the [CAR], it’s quite a longer preparation because we all know, it was in the Cordillera particularly in the province of Abra and the town of Laganilang, which is the epicenter of the recent earthquake. So for the [CAR], for the coordination meeting between the school heads and stakeholders, they have already gathered reports on the readiness of the schools from the school heads, and learning modalities to be implemented,” Bringas told lawmakers.

“It’s going to be a very unique case for some provinces or most provinces in the [CAR] […] in terms of inspection and validation of safe schools for the implementation of face-to-face classes, it was observed that most of the schools have safe classrooms suitable for F2F, but additionally full in-person classes will be implemented for schools with no damage,” he added.

According to Bringas, some schools that were damaged during the earthquake will be holding classes in gymnasiums, which regional and local DepEd officials have already prepared by setting up temporary classrooms.

“In terms of inspection of schools that are not safe for the implementation of face-to-face classes, the interventions of the Cordilleras would be the school gyms (which) were already prepared and tents were requested to Unicef as temporary classrooms or temporary learning spaces,” he said.

“The newly-constructed safe schools will be turned over to be used for face-to-face classes, shifting of classes will definitely be implemented for the schools with damaged classrooms, supported by the existing self-learning modules and MELC-mapped (Most Essential Learning Competencies) textbooks; open gymnasiums and tents would be utilized,” he added.

According to the reports from the respective DepEd regional offices, there are over 400 schools that were affected by the earthquake in the Ilocos Region, CAR, and Cagayan Valley.

However, CAR also appears as an area in Northern Luzon with the lowest enrollment turnout at only 232,001 or 52 percent of students enrolled. Cagayan Valley is better at 653,000 (68 percent), while Ilocos Region has the most students returning to classes at 811,259 (80 percent.

Bringas said other regions are also preparing for the resumption of classes, which was scheduled for August 22. Among the preparations done by school staffers are the implementation of health protocols to prevent the spread of COVID-19, and the provision of psychosocial support, especially for the earthquake victims.

“In relation to the opening of classes, the region is also re-strengthening the implementation of the mechanisms in schools to ensure zero to minimal risk of COVID-19 transmissions among learners and all school-based personnel,” he said.

“Region 2 is also strengthening its Oplan Balik Eskwela campaign of the Department which is an institutionalized program of the Department prior or two weeks before the opening of the school year. They are already organizing an online orientation and learning session for K-to-12 teachers on how to conduct psychosocial support activities for learners using the psychosocial support pack developed by the [DepEd],” he added.

Last August 2, the Department assured the public that there would be no delay in the school opening in CAR, as the teachers and students affected by the earthquake would have enough time to rest and prepare before August 22.

The earthquake in Abra was felt in the Ilocos Region, Cagayan Valley, and even as far as Metro Manila. The quake either destroyed or damaged several schools, hospitals, and heritage sites in Northern Luzon.

READ: DepEd: No delay in school opening in Cordillera