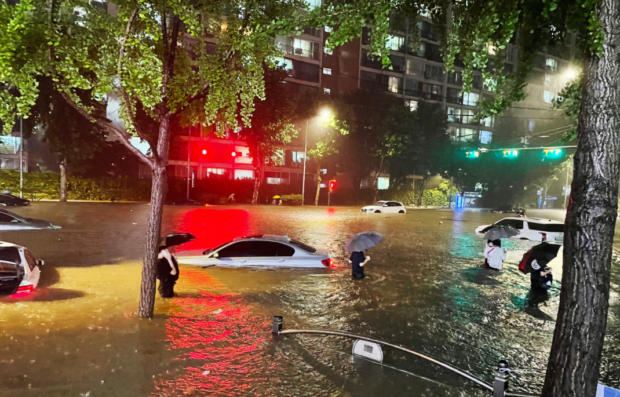 SEOUL — President Yoon Suk-yeol is facing backlash for responding to the heavy rain that pounded Seoul from his apartment on Monday after leaving his office earlier that afternoon.

Yoon, who became the country’s first commuting president by refusing to move into Cheong Wa Dae, was working from home as the rainfall ravaged Seoul before he showed up at the national emergency headquarters at around 9:30 a.m. Tuesday.

The main opposition Democratic Party of Korea on Tuesday denounced Yoon for failing to be in his office as “the worst rain in 80 years” swamped the capital.

“The president was unable to be present in person as the rest of the government was coordinating response. This goes on to show why the president’s residence and office need to be closely located,” she said.

Rep. Kang Hoon-sik, who is running for the party’s leadership, on the same day said the president remote working on Monday questioned “his ability to be where the president needs to be.”

“President Yoon said he couldn’t get to his office because of the rain,” he wrote on his Facebook. “Three months ago the president said, as he moved the presidential office out of Cheong Wa Dae, that it wouldn’t affect his ability to respond to emergencies. It already has.”

The minor Justice Party joined the Democratic Party in blasting Yoon in a statement that said, “a president who works from home in times of emergencies not a president that people can trust.”

“Making phone calls from home is not how presidents respond to disasters,” the party said.

Yoon’s office told reporters Tuesday that the president “placing orders over the phone is not that different from him being in the emergency headquarters.”

The office said Yoon was communicating with the Seoul mayor and ministers from late Monday through early hours of Tuesday via phone, as his neighborhood was among the more severely hit in the city.

Meanwhile worries over Seoul’s rain response are growing as the post of city’s office of safety management remains vacant, after the last person to hold the post was appointed as the deputy mayor at the start of this month. The safety management office oversees the city’s response to major disasters and emergencies.

On the vacancy, Seoul told The Korea Herald that the job was being still being executed by the director of water management.

Amid the chaos the head of Seoul’s Mapo-gu district, Park Kang-soo, drew criticism for his “tone-deaf” Facebook post.

As the rain stranded commuters and flooded homes late Monday, Park shared photographs of himself having dinner with a caption which read, “Hot soup on a rainy evening. This place is delicious.” The post has since been deleted.

While high-level Seoul executives are criticized for insensitivity, and the president for not being in his office, the rainfall has left at least seven dead — including a first responder in Dongjak, western Seoul. The Dongjak official died at around 7:30 p.m. Monday while cleaning up trees knocked over by the rain.