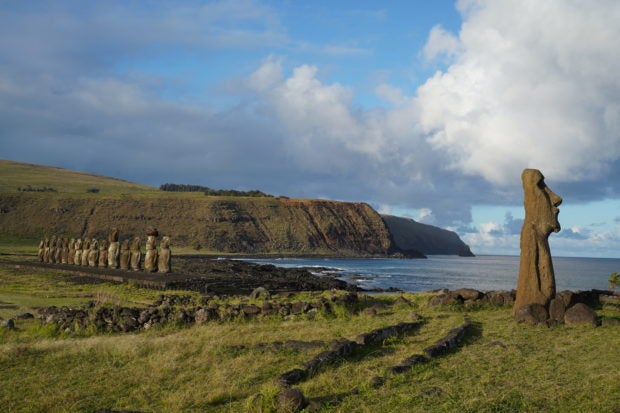 View of Moais — stone statues of the Rapa Nui culture — in Easter Island, 3700 km off the Chilean coast in the Pacific Ocean, on August 5, 2022. AFP

HANGA ROA, Chile — During more than two years of the coronavirus pandemic, Easter Island was closed to tourism — forcing inhabitants to turn to a more sustainable way of life and relearn forgotten skills.

Now that the island’s borders are open once again, local people, including the Rapa Nui indigenous population, want to resist the temptation to return to their pre-pandemic lifestyle.

“The time has come that the ancients predicted,” Julio Hotus, a member of the Easter Island council of elders, told AFP.

Hotus said the Rapa Nui people’s ancestors had warned about the importance of maintaining food independence because of the risk the island faced of one day becoming isolated, but that recent generations had ignored the warnings.

Before the pandemic, the island’s food supply was almost exclusively provided by Chile.

Easter Island lies 3,500 kilometers (2,100 miles) off the west coast of Chile and is world renown for its monumental statues of human figures with giant heads, called moai.

No tourists, no income

Olga Ickapakarati used to sell small stone moai figurines to tourists but once she was left without an income, she turned to agriculture and fishing to survive, just as her ancestors had lived before contact with European explorers.

“We were all left with nothing, we were left in the wind …. but we began planting,” Ickapakarati told AFP.

She took advantage of a program that delivered seeds before the island was shut off from the outside world.

What she didn’t eat, she shared with neighbors, just as many families did in creating an island-wide support network.

“All the islanders are like this. They have good hearts. If I see that I have a surplus of something, I give it to another family,” said Ickapakarati, who lives with her children and grandchildren.

This new focus on sustainable living does not mean an end to tourism on Easter Island.

Last week, the first airplane of tourists for 28 months landed on the island, to much excitement from the locals desperate to see new faces.

But there will be no immediate return to the two flights a day of yesteryear. There will be just two a week for now, although the number will gradually increase.

“We will continue with tourists, but I hope that the pandemic has taught a lesson that we can apply for the future,” said Hotus.

Another thing the pandemic did was to create awareness of the necessity to look after natural resources affected by climate change, such as water and energy. And also the emblematic moais.

Carved from volcanic rock by the Polynesian Rapa Nui people between 1200 and 1500, there are more than 900 on the island, which measures 24 kilometers by 12 kilometers.

The statues can measure up to 20 meters in height and weigh more than 80 tons.

Most remain at the quarry where they were originally carved but many others were carted to coastal areas to look inland, presumably for ceremonial purposes.

The moais have been damaged by heavy rainfall, strong winds and the ocean waves crashing against the statues and their bases, leading to fears for their future.

“Climate change, with its extreme events, is putting our archeological heritage at risk,” said Vairoa Ika, the local environment director.

“The stone is degrading” and needs to be protected.

“The problem with the moais is that they are very fragile,” added Pedro Edmunds Paoa, the island’s mayor, who says the statues’ worth is “incalculable.”

He said that authorities need to “forget about the tourist” vision and take protective measures, even if that means covering the statues “with glass domes”, which would ruin not just the authentic view but also tourists’ photographs.

He also wants inhabitants to make maximum use of natural resources and to prioritize locals in employment, while resurrecting the ancestral practise of fostering community solidarity.

“From now on the tourist must become a friend of the place, whereas before they were visiting foreigners,” said Edmunds Paoa.

Chile will reopen Easter Island to tourists in August