Tilapia worth P3M lost to fish kill in Taal Lake 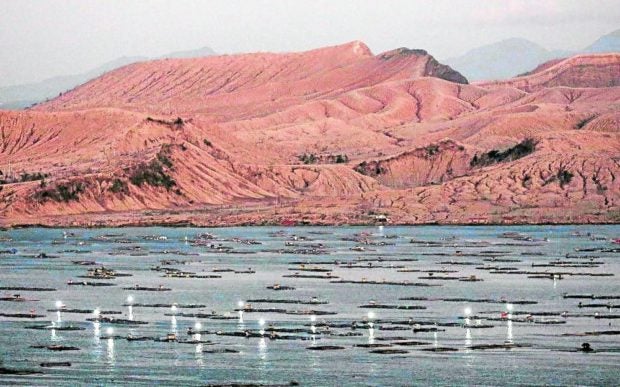 MANILA, Philippines — At least 31 tons of cultured tilapia turned belly up in fish cages in Taal Lake in Agoncillo, Batangas, due to low level of dissolved oxygen in the water, authorities said Tuesday.

Oliva Mirasol, Agoncillo municipal agriculturist, said the fish kill that hit the villages of Banyaga and Bilibinwang was first reported on Aug. 6.“From our latest estimate, the [value] of the marketable tilapia lost to the fish kill is now around P3 million,” Mirasol said in a phone interview Tuesday.

She said the fish kill affected 43 fish cage operators in the two villages.

At least 22 tons of the dead tilapia, including fingerlings in Bilibinwang, and another 9 tons in Banyaga were gathered by fish cage workers and were buried in designated pits.

Fish kill, Mirasol said, is a natural phenomenon in Taal Lake and occurs when the weather triggers a drop in dissolved oxygen in water.

The fish kill incidents were in no way related to Taal Volcano, which has decreased its activities with zero volcanic earthquakes and only 13,098 tons of sulfur dioxide (SO2) emissions detected on Monday, the Philippine Institute of Volcanology and Seismology (Phivolcs) said in a bulletin posted on Tuesday.

On Sunday, the SO2 gas flux in Taal was at 17,141 tons per day. Taal Volcano also recorded on Sunday three earthquakes lasting nine minutes.

On Aug. 4, Phivolcs recorded a total of 12,125 metric tons of volcanic SO2 emission which prompted the authorities to warn residents in communities surrounding Taal Volcano in Batangas to take safety precautions.

“At least they can recoup part of their investments,” she said.

The Bureau of Fisheries and Aquatic Resources has been advising fish cage owners to monitor their cages and take measures by installing oxygen tanks and pumps to augment the declining oxygen level.Tilapia cage farming is a multimillion-peso industry in Taal Lake, the country’s third largest freshwater body.