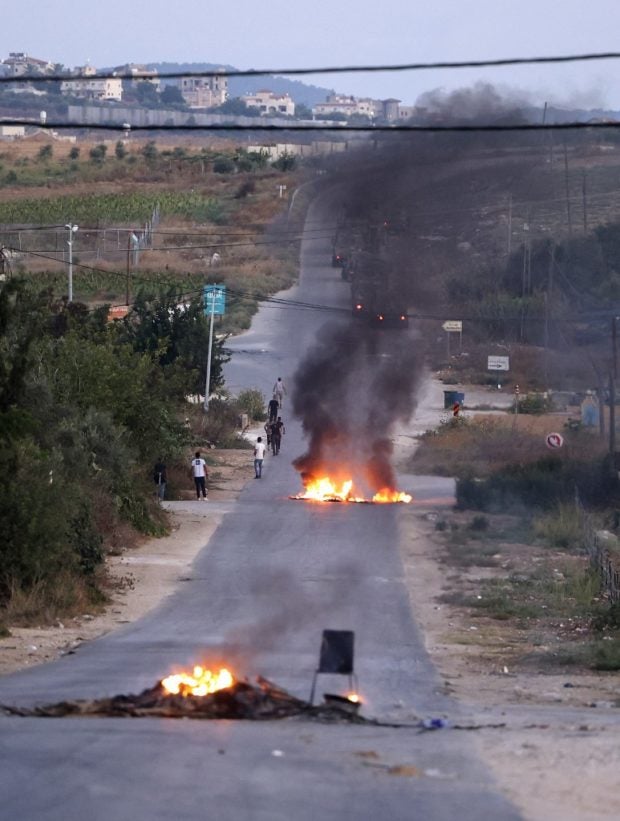 Palestinian protesters burn tires on a road as members of the Israeli army deploy to demolish houses in Rummanah town in the occupied West Bank, on August 8, 2022. (Photo by JAAFAR ASHTIYEH / AFP)

Nablus, Palestinian Territories — At least 30 Palestinians were wounded in heavy clashes Tuesday as Israeli troops raided a house in the occupied West Bank city of Nablus, two days after deadly fighting in Gaza was halted by a truce.

“Israeli army and special forces are surrounding the house of a wanted man in Nablus. There is exchange of fire,” the army said in a statement.

At least 30 Palestinians were wounded and at least one was in serious condition, according to the Red Crescent.

Palestinians traded gunfire with the Israeli army in the old city of Nablus, an AFP correspondent reported.

Clashes with the Israeli army also broke out in other parts of Nablus, as Palestinians hurled stones at the troops.

Heavy gunfire was heard from the ongoing clashes, as dozens of Israeli military vehicles brought traffic in one of the West Bank’s largest cities to a standstill.

Israeli security forces have conducted near-daily operations in the West Bank in recent months, focusing on militants from the Islamic Jihad group.

On Friday, Israel launched what it called a “pre-emptive” aerial and artillery bombardment of Islamic Jihad positions in the Gaza Strip, leading militants in the coastal enclave to fire more than a thousand rockets in retaliation, according to the army.

An Egypt-brokered ceasefire reached Sunday ended three days of intense fighting that killed 46 Palestinians, 16 of them children, and wounded 360, according to Gaza’s health ministry.

Israel insists that some of children and other civilians counted in the Palestinian toll were killed by Islamic Jihad rockets that fell short or misfired.

Prime Minister Yair Lapid said Monday that the bombardment had “landed a devastating blow to the enemy,” and that the “entire senior military command of Islamic Jihad in Gaza was successfully targeted.”

Islamic Jihad said 12 of its members had been killed, including commanders Taysir al-Jabari and Khaled Mansour.