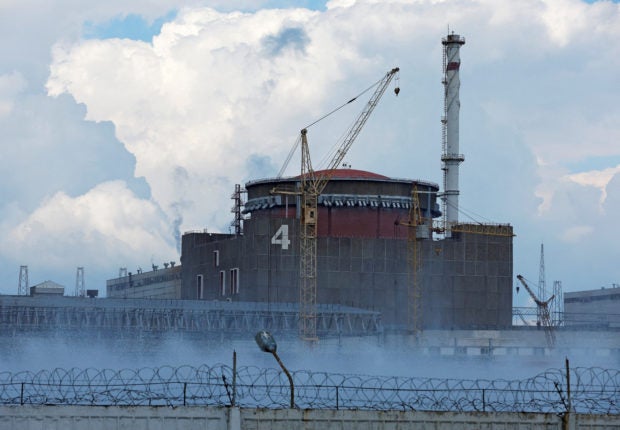 A view shows the Zaporizhzhia Nuclear Power Plant in the course of Ukraine-Russia conflict outside the Russian-controlled city of Enerhodar in the Zaporizhzhia region, Ukraine August 4, 2022. REUTERS

KYIV — Kyiv and Moscow traded blame on Monday for the weekend shelling of Ukraine’s Zaporizhzhia nuclear complex amid international alarm that their battle for control of the plant could trigger catastrophe.

Calling any attack on a nuclear plant “suicidal”, United Nations chief Antonio Guterres demanded U.N. nuclear inspectors be given access to Zaporizhzhia, the largest complex of its kind in Europe.

Russia’s invading forces seized the southern Ukrainian region containing Zaporizhzhia in March, when the site was struck without damage to its reactors. The area, including the city of Kherson, is now the target of a Ukrainian counter-offensive.

Ukraine appealed for the area around the complex to be demilitarised and for the International Atomic Energy Agency, the U.N.’s nuclear watchdog, to be let in. Russia said it too favoured an IAEA visit, which it accused Ukraine of blocking while trying to “take Europe hostage” by shelling the plant.

Ukraine blamed Russia for weekend attacks around the complex, which is still being run by Ukrainian technicians. It said three radiation sensors were damaged and two workers injured by shrapnel.

As of Monday morning, the plant appeared to still be running, said Petro Kotin, head of Ukraine’s state nuclear power company Energoatom. He said 500 Russian soldiers and 50 pieces of heavy machinery, including tanks, trucks and armored infantry vehicles were at the site.

The Ukrainian staff at the plant had nowhere to shelter, he added.

Dr Mark Wenman, a nuclear expert at Imperial College London, played down the risk of a major incident, saying the Zaporizhzhia reactors were relatively robust and the spent fuel well protected.

“Although it may seem worrying, and any fighting on a nuclear site would be illegal …the likelihood of a serious nuclear release is still small,” he said in a statement. 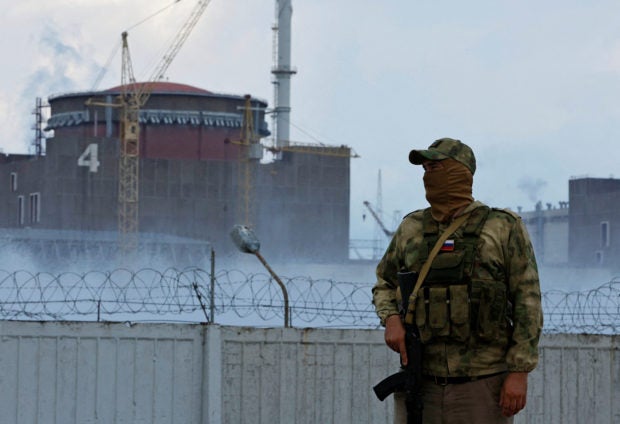 Yevhenii Tsymbaliuk, Ukraine’s ambassador to the IAEA, said Zaporizhzhia staff were “working under the barrels of Russian guns”.

Meanwhile, Russia’s defence ministry said Ukrainian attacks had damaged power lines servicing the plant and forced it to reduce output by two of its six reactors to “prevent disruption”.

“Any attack (on) a nuclear plant is a suicidal thing,” he told a news conference in Japan, where he attended the Hiroshima Peace Memorial Ceremony on Saturday to commemorate the 77th anniversary of the world’s first atomic bombing.

The world’s worst civil nuclear disaster occurred in 1986 when a reactor at the Chornobyl complex in northwest Ukraine exploded. Soon after this year’s Feb. 24 invasion, Russian troops occupied that site, withdrawing in late March.

Ukraine has said it is planning to conduct a major counter-offensive around Kherson and that it has already retaken dozens of villages.

Its forces are also fighting to retake areas near Kharkiv in the north, where Russian forces launched artillery strikes on Monday, Ukraine’s general staff said.

In Ukraine’s Donetsk region, where pro-Moscow separatists seized territory after the Kremlin annexed Crimea to the south in 2014, Russia was “using all available fire power…to try and inflict maximum losses on Ukrainian units to prevent them from reinforcing other areas,” the general staff added.

Stepping up its fiscal aid and military spending on Ukraine, Washington announced it will send $4.5 billion in budgetary support and $1 billion in weapons, including long-range rocket munitions and armored medical transport vehicles. Overall, the United States has contributed more than $18 billion to Ukraine this year.

Russia’s foreign ministry meanwhile told the United States it was suspending inspection activities under their START nuclear arms control treaty, though it said Moscow remained committed to the treaty’s provisions. 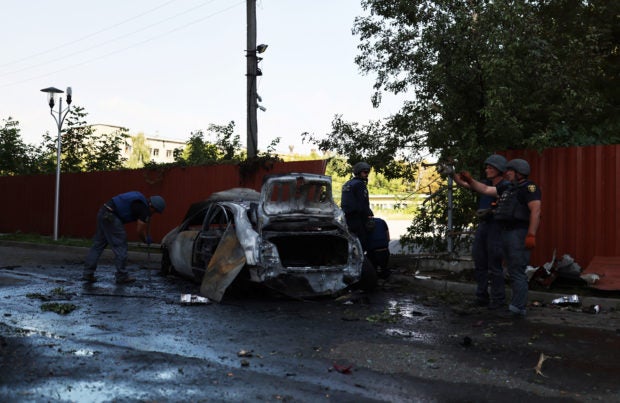 Police officers work next to a destroyed car after a Russian military strike, as Russia’s invasion of Ukraine continues, in Kharkiv, Ukraine August 8, 2022. REUTERS

That raised the total to 12 since the first vessel left a week ago.

The July 22 grain export pact, brokered by Turkey and the United Nations, was further underpinned as the parties issued procedures for merchant ships carrying Ukrainian grain, including a 10-nautical-mile military exclusion zone, according to a document seen by Reuters.

Before the invasion, Russia and Ukraine together accounted for nearly a third of global wheat exports.

Russia says it is waging a “special military operation” in Ukraine to rid it of nationalists and protect Russian-speaking communities. Ukraine and the West describe Russia’s actions as an unprovoked war of aggression.

The conflict has displaced millions, killed thousands of civilians and left cities, towns and villages in ruins.