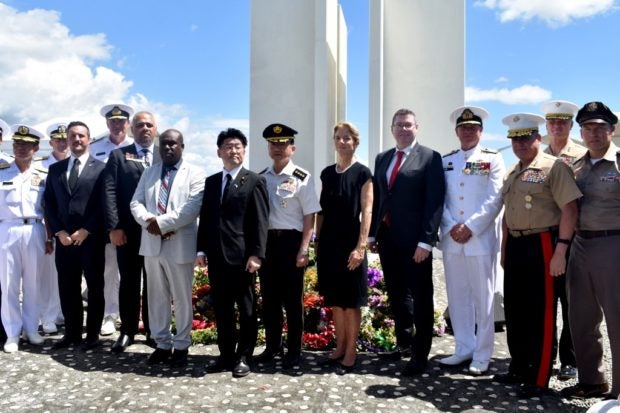 This picture taken on August 7, 2022, shows Japan’s Defense Minister Makoto Oniki (5th L) posing for pictures with US Ambassador to Australia Caroline Kennedy (5th R) and Australian Minister for International Development and the Pacific and the Minister for Defense Industry Pat Conroy (4th R) during a ceremony marking the 80th anniversary of the Battle of Guadalcanal at Skyline Ridge in Honiara on the Solomon Islands. (Photo by Charley PIRINGI / AFP)

Video of the incident showed half a dozen servicemen, including US forces, trying to control a bearded man in a yellow T-shirt struggling on the ground.

One of the servicemen loses his cap, falls over and rolls a short way down a hill as the assailant scrambles away before being trapped in a headlock and carried away by local officials.

US Deputy Secretary of State Wendy Sherman was among those attending the ceremony at Bloody Ridge near Honiara to mark the 80th anniversary of the Battle of Guadalcanal.

The injured man was a 27-year-old media spokesman on the Japanese destroyer JS Karasame, which was visiting as part of a regional training exercise, said an official at the Japanese embassy who asked not to be named.

The embassy official, who had no details of the incident itself, said the injured member of the Japanese Maritime Self-Defense Force was given first aid by an ambulance at the scene.

The ambulance rushed him to a hotel for further treatment by US medical staff who were staying there. He was then taken back to his ship, where he was confirmed to have “no problem at all,” the embassy official said.

The Solomon Islands’ culture and tourism ministry, which hosted the memorial, formally apologized to Japanese officials in a ceremony shortly after the assault.

“We know it was not targeting any particular Japanese, it could have been anyone,” said Barney Sivoro, permanent secretary of the ministry.

“We know it could have been worse, could have threatened his life,” Sivoro said, applauding the “swift action” by those standing nearby to bring the man under control.

“I would like to say here that it is an isolated incident by somebody (who) — from information we had — is mentally affected,” he added.

The Solomons official said others living in the surrounding national park did not condone such an “uncivilized act of cowardice”.

The man had been arrested “on the spot” by police and would be dealt with according to the law, Sivoro added. “The government and its people are really sorry for what happened today.”