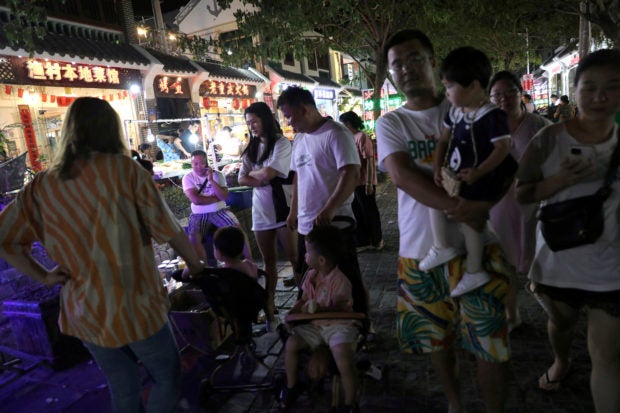 BEIJING/SHANGHAI — When Chinese businesswoman Yang Jing was planning this year’s summer holiday in 2021, she chose the tropical southern island of Hainan because of its nigh-perfect COVID track record.

The island in the South China Sea recorded just two positive symptomatic COVID-19 cases in the whole of last year. Fast forward to this month, however, and the number of cases has suddenly soared, prompting a lockdown in the city of Sanya and leaving tens of thousands of tourists like Yang stuck on the island.

Sanya, the island’s main tourist hub, imposed a lockdown on Saturday and restricted transport links to try to stem the outbreak, even as some 80,000 visitors were enjoying its beaches at peak season. Many are now stuck inside hotels until next Saturday, if not longer.

Yang, along with her husband and child, are staying at a four-star hotel paid out of their own pocket. The family is eating pot noodles every day to avoid spending more on food.

“This is the worst holiday of my life,” Yang, who is in her 40s and lives in Jiangxi province in southern China, told Reuters on Sunday.

Sanya reported 689 symptomatic and 282 asymptomatic cases between Aug. 1 and Aug. 7. Other cities around Hainan province, including Danzhou, Dongfang, Lingshui, and Lingao, have all reported over a dozen cases in the same period.

On Saturday, the sale of rail tickets out of Sanya was suspended, state broadcaster CCTV reported, citing the national operator, and more than 80% of flights to and from Sanya had been canceled, according to data provider Variflight.

Hainan has been closed to overseas tourists for the past two and half years since China, in response to the pandemic, stopped issuing tourist visas and implemented strict quarantine rules.

Sanya’s government announced on Saturday that tourists who have had their flights cancelled would be able to book hotel rooms at half price.

But dozens of tourists on Sunday complained in WeChat groups that their hotels were not applying such a rule and they were still having to pay rates similar to the original prices. Two stranded tourists told Reuters they were in such a situation.

“We are now looking for ways to complain and defend our rights, but so far no official body has contacted us or taken any interest in us,” said one of the tourists, a woman from the eastern China province of Jiangsu, who only gave her surname as Zhou.

A foreign tourist who lives in China and was on honeymoon in Sanya, said that additional issues for stranded tourists included massive price hikes in food delivery fees, meal prices at hotels, as well as flight tickets out of Hainan. Food supplies in his hotel were also running low, he said, without wishing to be named.

“We just hope it won’t turn into another Shanghai,” the tourist said, referring to that city’s recent draconian, two-month lockdown.

The outbreak in Hainan is the latest challenge to China’s zero-COVID policy, after the chaotic lockdown in Shanghai dented Beijing’s narrative that its handling of the pandemic was superior to other countries like the United States, which has recorded over a million COVID deaths.

Domestic visitors have kept the tourism industry on Hainan alive through much of the pandemic, but this sudden lockdown risks turning some tourists away for good.

“In short, we will never come back!” said Zhou, who was on holiday with six other family members.

Sanya authorities have said that stranded tourists can leave the island starting next Saturday, provided they have done five COVID tests and obtained negative results for all of them.

However, Yang said the waiting times for test results have been long, prompting her to get multiple tests a day.

“We don’t know who to go to, the internet only has positive news about Sanya, such as… the Sanya municipal government has properly resettled the 80,000 stranded tourists… as if the whole country thinks that (we) are not victims, but beneficiaries,” she said.

Over 80,000 tourists trapped in ‘China’s Hawaii’ after COVID-19 outbreak

Hainan projected to be new gateway for China-Asean trade