UN chief Guterres: Risk of nuclear confrontation is back after decades | Inquirer News

UN chief Guterres: Risk of nuclear confrontation is back after decades 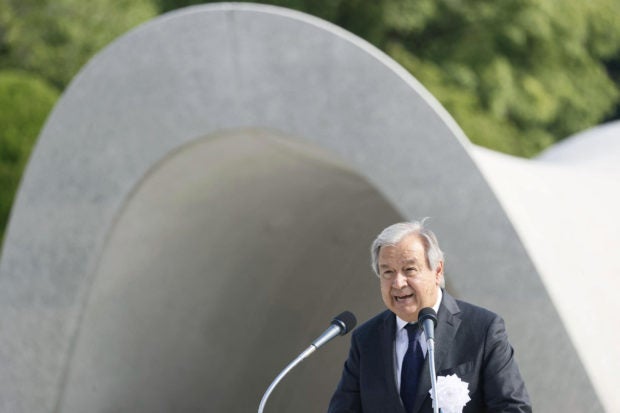 U.N. Secretary General Antonio Guterres delivers a speech during a ceremony to mark the 77th anniversary of the world’s first atomic bombing, at Peace Memorial Park in Hiroshima, western Japan, August 6, 2022, in this photo taken by Kyodo. Kyodo via REUTERS

TOKYO — United Nations Secretary-General Antonio Guterres said on Monday that the risk of nuclear confrontation had returned after decades, calling on nuclear states to commit to no first use of the weapons.

Any attack on a nuclear plant is a “suicidal thing”, Guterres said, responding to reports of renewed Russian shelling of the Zaporizhzhia facility in Ukraine, Europe’s largest nuclear power plant.

Guterres spoke at a news conference in Tokyo after attending the Hiroshima Peace Memorial Ceremony on Saturday to commemorate the 77th anniversary of the world’s first atomic bombing.

He also called on Japan to halt public and private financing of coal projects as part of the country’s commitments in curbing fossil fuel emissions.