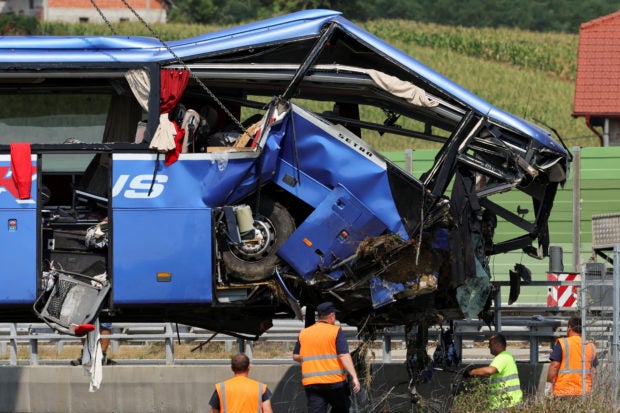 Rescuers work as a crane removes the bus with Polish license plates that slipped off a road, from the scene near Varazdin, northwestern Croatia, August 6, 2022. REUTERS

VARAZDIN, Croatia — Twelve people were killed in Croatia on Saturday when a Polish bus filled with religious pilgrims slipped off a road and crashed near Varazdin, authorities said.

Thirty-two people were injured in the crash which happened at 5:40 a.m. (0340 GMT) on the highway between Varazdin, in northwest Croatia, and capital Zagreb.

Marcin Przydacz, deputy head of the Polish Foreign Ministry, who was traveling to the site on Saturday, said the injured were being treated at five hospitals in Croatia.

He said there were 44 Polish pilgrims on the bus driving from Poland to Medjugorje, a Roman Catholic shrine in southern Bosnia, including two drivers. Among them were three priests and six nuns, a ministry spokesman said.

Police cleared the area where the accident took place after firefighters and medical teams recovered all the occupants of the vehicle which had Warsaw registration plates.

Polish police officers, in Croatia as part of project “Safe Tourist Destination” project, were helping Croatian authorities in communicating with the survivors.

An investigation has been started into the cause of the accident.

Croatia opens bridge around Bosnia to get to Dubrovnik